The Corps Network Joins Green For All for "Forum on Climate Change, Clean Energy, and Communities of Color" 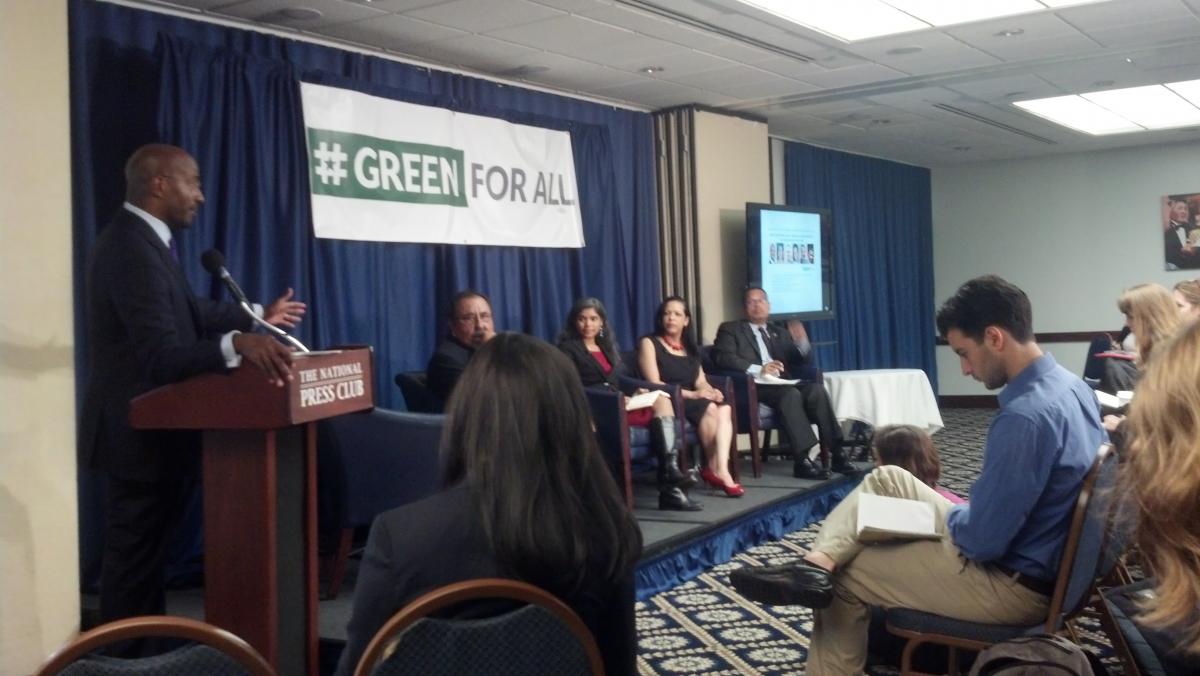 Yesterday several members of The Corps Network's staff were honored to join Green For All at an event that focused on the opportunities presented to communities by President Obama and the Environmental Protection Agency's finalized Clean Power Plan. Photo Credit: Levi Novey, Corps Network

In her opening remarks, Vien Truong put a big emphasis on her desire to tell the uplifting stories of those people who have not traditionally benefitted from the economics of the energy industry and who probably have been negatively impacted by pollution. She said that there were already many positive examples, from places like California, where new programs were helping communities benefit from clean energy economically as well as environmentally.

In his keynote, Van Jones then spent a few minutes detailing the challenge that President Obama has faced in reducing carbon emissions. He then introduced a panel he moderated by asking "How do you take the new rules [of the Clean Power Plan] and push down on the pollution and up on jobs? That's what we are going to hear about today."

Van did not shy away from bringing some less savory thoughts and comments out into the open, and began the panel by asking Elianne Ramos, CEO of Speak Hispanic Communications, to respond to the idea "that a lot of people pretend that Latinos don't care about the issue [environmentalism]." Elianne responded that this perception was false and that connections with nature were strong within Latino cultures. For instance, she mentioned that recycling and reusing materials was a well-established part of Latino culture.

Keya Chatterjee, Executive Director of the US Climate Action Network, spoke about the importance of giving people the opportunity to come together and find common ground. She mentioned that the recent climate march in New York City was attended by a variety of immigration and AIDS advocacy groups, whose chief cause might not have been climate change, but nonetheless it was something that they supported.

U.S. Congressman Keith Ellison (MN) emphasized that in regard to positive developments in the clean energy sector, "people who profit from the status quo are going to push back." He said, however, to not be deterred, and to "not treat the clean power plan as a Washington thing."

Van Jones asked U.S. Congressman Raul Grijalva to speak about a bill he recently introduced that would boost clean energy on tribal lands. The Congressman responded by explaining that "having clean power as an economic tool could be powerful." He mentioned that the excess energy produced by tribes could be sold outside of reservations, providing a new economic resource for tribes. He also noted that tribes own lands that count toward more than 25% of the United States' renewable energy capacity.

The conversation then took a turn and focused on how to build a stronger grassroots movement. Elainne Ramos spoke about the need to establish leadership pipelines that would provide young people with more opportunities to be involved and receive mentorship from current environmental leaders. This is the type of work, of course, that members of The Corps Network excel at doing.

One of the other big topics discussed by the panel and also later in a keynote address by Rev. Dr. Otis Moss III, were how to blend together the goals of religious groups and envionmentalism. Rev. Moss III highlighted how as part of Green For All's "Green the Church" initiative, his church had implemented a variety of environmental practices, including an organic farm. He noted that organic farming in particular, was a fantastic hands-on opportunity to incorporate STEM-focused learning for participants. He also talked about how his church was involving returning citizens from prison in projects, including the renovation of the church into a LEED-certified building.

In his concluding remarks, Congressman Grijalva implored for the audience to reach new people and broaden the movement and "keep it personal, and talk about the future." He added: "Climate change is the most important unifying issue we have as a country and a globe... Barack's got a nice wingman right now with Pope Francis on the issue."

The Corps Network looks forward to continuing to work with Green For All to broaden the environmental movement to communities of color. We will also continue to work with our members to implement the Clean Power Plan and activities that combat climate change.