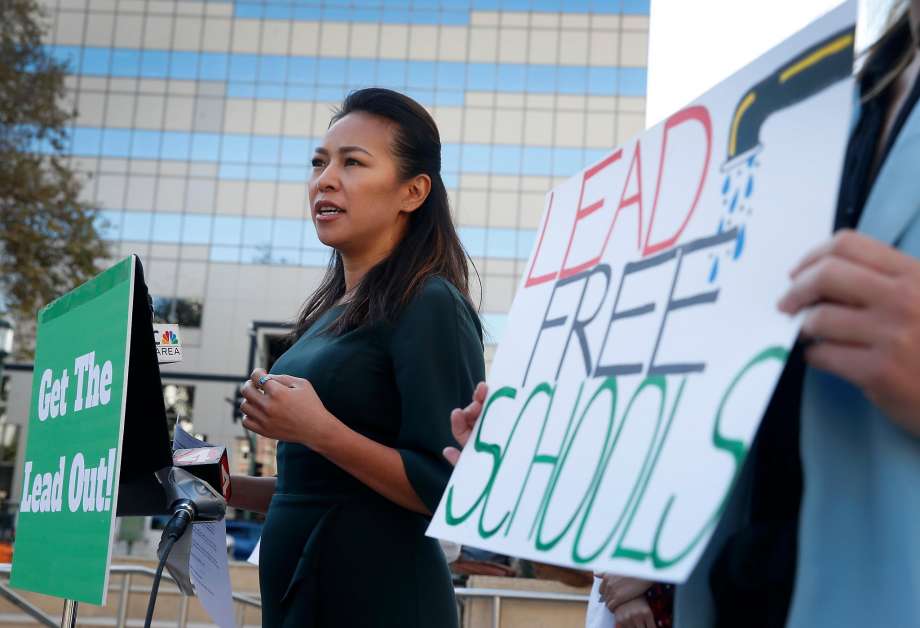 Vien Truong, CEO of Dream Corps, speaks at a news conference by local groups in Oakland, Calif. on Wednesday, Nov. 1, 2017 to launch a new campaign to remove lead from drinking water at Oakland schools.

Despite recent alarming revelations that children in 10 San Francisco and Oakland schools had been exposed to lead contamination well above federal safety standards, data from household water quality tests performed this year by the Bay Area’s two major utilities indicate that lead levels remain well below dangerous thresholds in the vast majority of the region’s homes.

In addition to routine systemwide inspections for lead and other toxic materials in their drinking water, the San Francisco Public Utilities Commission and the East Bay Municipal Utility District, which together deliver water to more than 4 million Bay Area residents, also conduct lead tests for individual households, upon request.

San Francisco’s Public Utilities Commission performed water quality analyses on 211 household faucets this year and taps from Jan. 2 to Oct. 17. Of those, six contained lead levels above 15 parts per billion. By far the most heavily contaminated sample, taken from a bathtub faucet, registered 698 parts per billion. Notably, since shower and bath faucets aren’t considered typical drinking-water fixtures, they are exempt from lead-free plumbing requirements.

The San Francisco agency charges $25 for each tap it checks, though households eligible for the Women, Infants and Children Program, which provides food and other benefits to low-income families, can apply to have the tests performed for free.

Across the Bay, EBMUD rolled out a program in March that allows customers to apply for a voucher for a certified lab to test their water at no cost. Since the program began, 70 tap tests have been conducted and none were found to contain lead levels above 15 parts per billion.

In 2014, the agency also analyzed the taps at 55 of its customer’s homes as part of a scheduled water quality testing program required under federal regulations. In all, 99 percent of those tests revealed lead levels below 15 parts per billion, and 90 percent were below five parts per billion.

Lead can cause a grim array of short- and long-term health problems, including brain and nervous system damage, anemia and hypertension, when enough accumulates in the body. It poses an acute threat to young children, who can absorb up five times more of it when ingested compared to adults, according to the World Health Organization.

While no amount lead is considered “safe” to ingest, the Environmental Protection Agency’s lead and copper rule mandate that water utilities take action when systemwide lead levels exceed 15 parts per billion. Both SFPUC and EBMUD rely on that as a benchmark for household lead tests.

Since the 1980s, efforts to eliminate water service lines containing lead have “greatly reduced” exposure to lead in tap water nationwide, according to the Centers for Disease Control or Prevention. In most cases, when dangerous levels of lead are detected, the source can be traced back to corroded household plumbing materials, often in older homes. Lead cannot be seen, smelled or tasted when dissolved in water.

“It is much more common for older (plumbing) fixtures to have trace elements of lead than pipes underground, said David Briggs, EBMUD’s manager of water operations.

Both utilities recommend that anyone who finds elevated lead levels in their home taps arrange to have their fixtures inspected and replaced — particularly in older homes. Since 2000, California law has required that all kitchen faucets sold in the state must be “ultra-low lead.” According to the SFPUC, most faucets purchased prior to 1997 were made of brass or chrome-plated brass containing up to 8 percent lead.

“We encourage property owners to contact plumbers and contractors directly to make upgrades to their plumbing system,” said Tyler Gamble, an SFPUC spokesman. When replacing plumbing fixtures, the utility also recommends selecting products certified by the National Sanitation Foundation as being “lead free.”

In homes with older plumbing systems and fixtures, experts also suggest flushing taps for up to two minutes before drawing water for cooking or drinking to clear away any water that might be contaminated. That’s particularly important to do for faucets that haven’t been used in several hours, when lead can leach from a faucet’s interior.

“If people aren’t clear about how safe their water is, running and flushing the taps is the best thing to do,” Briggs said.