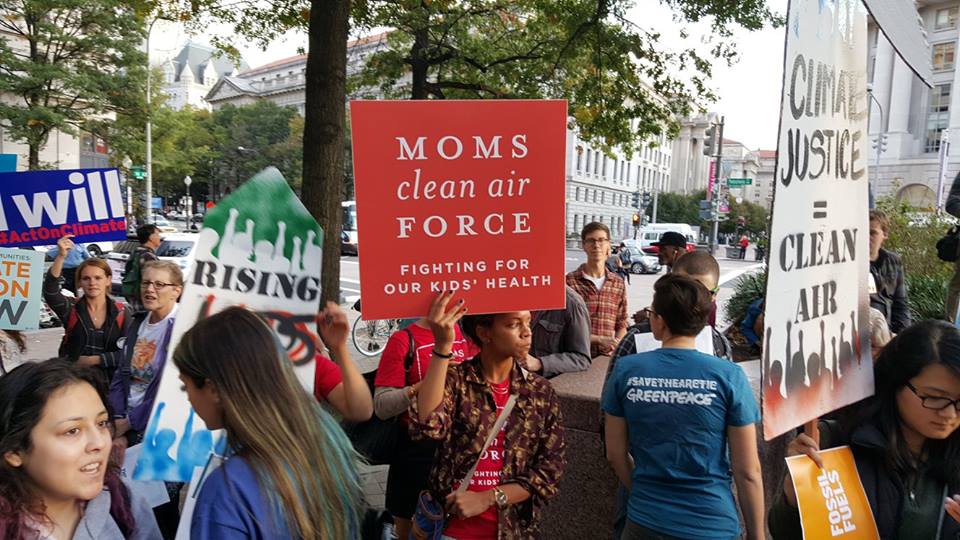 Lisa Hoyos was driving to a birthday party when a news report about climate change came on the radio. As the story described the food scarcity and systems collapse likely to occur by 2040 if the climate crisis continued unabated, Hoyos did the math — and realized that her two young sons would be only in their early thirties by then, their lives directly affected by this bleak scenario.

“I had this lightning-bolt fearful sensation,” she remembers. “And I was sure that if parents really understood the depths of the threat to our kids, they’d want to do something.”

Spoiler: She was right.

That was 2008. Hoyos began poking around to find out what it would take to rally her fellow parents around the climate issue. She cofounded Climate Parents with author Mark Hertsgaard in 2012, and has since built a membership of 50,000 people.

During that same time, new and emerging groups with names like Moms Clean Air Force, Cool Mom, Mothers Out Front, and Climate Mama attracted a collective million or so other pissed-off parents. Those ranks swell when you factor in international allies such as Canadian Parents for Climate Action, the multinational Grands-Parents pour le Climat, and the deliciously named Parents Roar, based in Sweden.

Taking their place in a storied tradition of mothers as political and social activists, these groups are attracting a racially and politically diverse constituency hellbent on doing everything in its power to un-screw up the world. The results of the U.S. election have only strengthened that resolve.

“Having a man who denies climate change science in the White House poses a grave threat to all we hold dear,” says Kelsey Wirth, a parent of two who founded Mothers Out Front in 2013. “[But] we have the most potent counter to this: a growing movement of mothers who will stop at nothing to protect their kids.”

Over the past century, mothers have banded together to reform labor laws and the juvenile justice system. They have kicked toxic industries to the curb, from New York to East L.A., and taken on drunk drivers, dictators, and the draft. And they have shown no inclination to relent in the face of threats, obstacles, or ignorance.

Mothers: Don’t fuck with them.

“For better or worse, women tend to bear the responsibility for raising children, and for raising them into happy, functioning, healthy adults,” says Andrea O’Reilly, who directs the Motherhood Initiative for Research and Community Involvement at Toronto’s York University. “If something is standing in the way of that, something that prevents them from fulfilling that mandate, they’re going to fight back.”

The maternal climate fight did not begin in the past few years, of course. Ask any woman around the world who has tried to protect her family from a polluting power plant, a leaky pipeline, crop failure, or a violent hurricane. But the rise of mother-led climate organizations is providing new ways to take action and a new sense of solidarity.

Browning launched Moms Clean Air Force as a project of the Environmental Defense Fund in 2011. Five years later, the group has 900,000 members, with two dozen field organizers on the ground in nearly 20 states — red and blue alike, Browning points out.

The mother-led climate movement does seem to be transcending the political, racial, socioeconomic, and geographic barriers that have so often hobbled the mainstream environmental movement. Hoyos, whose bio on the Climate Parents site points out that she is Latina and bilingual, says that’s part of her mission — and one of the most exciting results of her work: “We are building a diverse movement that looks like our country.”

Why are so many mothers standing up to be counted on climate? In part it’s because women tend to see climate change as a personal threat. Earlier this year, an online energy marketplace polled 2,000 Americans and found that women were more concerned about the issue than men. That informal indicator came on the heels of a 40-country survey by the Pew Research Center that found women aren’t just more worried about climate change than men — they’re also more worried that the global crisis will harm them personally.

This is not a baseless fear. Women and children are uniquely vulnerable to climate change. A report produced by the U.K.-based Women’s Environmental Network in 2010 suggested that up to 80 percent of climate refugees were women. And mothers in the U.S. are likely mobilizing on the issue because it is finally hitting close to home.

“When we are seeing mothers in Aliso Canyon who had to move their families out of their homes for six months because of gas leaks, when we’re seeing families who can’t prepare food or take showers because of extreme drought, when we’re seeing things like this happen in our own homes, we can no longer deny that climate change is an important issue,” says Vien Truong, executive director of Green for All. “Our country has been focused for too long on blowing up mountaintops for coal and digging in backyards for oil, and it has come at a cost to our kids: their air, water, security, and future.”

A lawyer with 3-year-old twins, Truong says her own mother’s work in strawberry fields and sweatshops “taught me about the strength of women, the strength of moms, and the things we do to help our kids have a better future.” She believes mothers have a critical role to play in the battle against climate change. “Mothers operate from a place of love, and they have the credibility to speak powerfully on behalf of their children and their communities.”

These gas leaks aren’t going to detect themselves

Climate change is highly abstract, highly politicized, and requires global cooperation to solve — not exactly a candidate for bite-sized activism. For many years, the proffered entry points for most mothers were consumer-oriented. If they could just make their own organic baby food and use cloth diapers, the messaging aimed at them seemed to go, they’d be doing their part. Today’s mother-led movement says to hell with all that.

While it’s hard to claim victory against a looming global apocalypse, mother-led climate groups have made tangible gains. Moms Clean Air Force, Climate Parents, and Mothers Out Front joined with a dozen like-minded groups to form a coalition called Our Kids’ Climate in advance of the landmark Paris climate talkslast year. They participated in press conferences and panels during the talks and helped deliver 6.2 million petition signatures to U.N. Secretary-General Ban Ki-moon demanding bold action.

That was a high-profile, headline-grabbing move — but most of this work is daily-grind stuff that will never trend on Twitter. In 2012, Moms Clean Air Force mobilized its young-but-fast-growing network to send more than 50,000 messages that helped inspire the bipartisan defeat in the Senate of a proposal by climate denier Sen. James Inhofe. Members have since met with policymakers, organized marches and letter-writing campaigns, and held “play-ins” at the U.S. Capitol and other sites. After the election, Moms Clean Air Force leaders pledged to “resist any attempts to cripple the Clean Air Act” and asked members to speak out against the nomination of Scott Pruitt to head the EPA, among other actions.

Meanwhile, the Boston-based Mothers Out Front has focused on local efforts such as the none-too-glamorous task of mapping natural-gas leaks and lobbying policymakers to fix them. The group says gas leaks in the city of Boston contribute more to climate change than all of the city’s cars. So far, it has convinced 37 Massachusetts communities to pass resolutions in favor of regulating such leaks, and it saw a victory this summer when the governor signed a statewide renewable energy bill that addressed gas leaks in the state for the first time.

With the goal of supporting a swift and just transition to a clean-energy economy, Mothers Out Front has inspired new chapters in California, New York, and Virginia. After the presidential election, Wirth, a former Grist board member, said the organization “saw a significant uptick in the number of mothers reaching out to us, wanting to get involved.” Now mothers in at least 12 more states are ready to dive in, she says — “not by signing up for our emails, but by organizing in their communities.” She expects the organization she founded just two years ago to double or triple in size in the coming year.

Hoyos is also positioning Climate Parents for growth: This fall, she brought the organization under the umbrella of the 2,400,000-member Sierra Club. The move came on the heels of some notable successes, including a 2015 press conference with Rep. Tammy Duckworth (D-Ill.), herself a new mother, that helped convince Sen. Mark Kirk (R-Ill.) to break ranks with Republican leaders and support the Clean Power Plan. Climate Parents also pushes to include climate science in public-school curricula, and played a role in the recent decision by coal-reliant West Virginia to teach students the facts. Energized by those wins, Hoyos’ group is urging President Obama to build on his climate legacy in his remaining days in office and preparing to mobilize more parents in the fight for racial, economic, and environmental justice.

The moral of the story

In the late 1960s, a rallying cry took hold among women fighting for equal rights: “The personal is political.” That phrase might feel hackneyed today, but it holds true. While words like “love” and “moral” came up repeatedly in the interviews for this story, so did the idea that this maternal uprising is fast becoming a political force.

“We are developing mothers as an empowered and activated constituency,” says Wirth. “To see mothers getting involved and working together and going through a process of personal transformation as they take on that work is incredibly moving. At some fundamental level I believe we are reinvigorating our democracy.” Hoyos expressed a similar sentiment, saying she sees climate-parent groups building the foundation of a “formidable political constituency.”

Now faced with a president-elect who has claimed that climate change is a hoax, mother-led climate groups are redoubling their commitment and joining the many other activists girding for battle. After the election, Browning wrote, “Parents who believe in our right to clean air and clean water and a stable climate have become the checks and balances on a president who threatens to trample those, and many other, rights.”

They say a mother’s work is never done, and the climate fight will push that cliché to its rubber-bandiest extremes. The million-plus people who’ve aligned themselves with these groups have committed to a long slog that just got a whole lot harder. They might not see victory, if it ever comes. But they aren’t in it for themselves.

Those seeking comfort in the wake of the election found this message on the Climate Parents Facebook page: “Having kids is a vote for hope. No matter what. Hug your kids tight, and assure them that we the parents, grandparents, aunts and uncles are going to work harder than ever to create the kind, compassionate, peaceful, and livable world they deserve.”