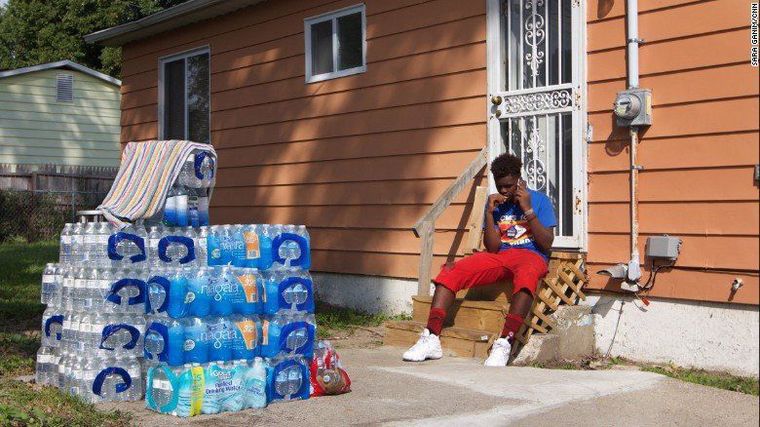 Residents of Flint, Michigan have very little to celebrate, three years after the water crisis in the city made national headlines.

On April 25, as citizens of the blue-collar city, located about one hour from Detroit, marked the third anniversary of the announcement that over 100,000 men, women and children had potentially been exposed to high levels of lead in the drinking water, the suffering continues.

The health crisis arose shortly after officials decided to switch drinking water sources to the Flint River. Before long, thousands began to suffer from illnesses linked to the contaminated water, including an estimated 12,000 children who have been exposed to dangerously-high levels of lead. And while an estimated 15,000 children in the city will soon receive extra money for nutritional foods that can limit the effects of the lead exposure, that assistance will not be extended to families who left the city—even though their children may suffer from health problems related to the lead-contaminated water.

That decision, made by the Michigan Department of Health and Human Services, has not been well received. For now, qualifying families will receive a one-time payment of $420 for each eligible child —funds that come from $7 million in additional food assistance from the Temporary Assistance for Needy Families block grant.

But for those like one former Flint resident and mother who moved barely a stone’s throw away for the sake of her young child’s health, the dollars won’t be made available.

“If I had moved to another state, I could understand being treated differently. But moving just 15 minutes away, I feel like it’s unfair,” said Ariana Hawk in an interview with the Detroit Free Press.

Meanwhile, a fundraising campaign has been launched by California-based Green for All—a climate and economic justice organization that focuses on poverty and pollution to create an inclusive green economy strong enough to lift people out of poverty.

Vien Truong, the director of Green for All said that the #FixThePipes campaign has raised $10,000 to fix Flint homes. With several celebrities signing on and asking their followers to give their support, including Van Jones, Common, Russell Simmons and most recently hip-hop artist Big Sean, she expects to see the level of donations increase.

“Every dollar we collect brings Flint families one step closer to clean bathing and drinking water,” said Truong, who estimates that the bill for removing lead-contaminated pipes is $10,000 per home. “Many don’t know that over 8,000 city residents now have tax liens [on their homes] for refusing to pay for poisonous water,” Truong said. “It’s outrageous that three years later, families living in Flint still don’t have clean drinking water. Lead has poisoned over 300,000 people. Meanwhile, companies have left, restaurants have closed, property values have declined and investors have gone elsewhere. We have to make people remember and help.”

Truong continued: “With President Trump promising to cut the EPA budget by one-third, Americans need to understand that what’s happened here in Flint will one day become the norm. One can intellectualize this all they want but studies show the disproportionate number of landfills, toxic facilities and dumps are more often located near the dwellings of low-income families or near places where people of color reside. No one speaks for them. Race remains a prevalent factor.”

One young activist who has served as the face of the Flint water crisis, nine-year-old Amariyanna Copeny, also known as “Little Miss Flint, joined other protesters during the “Stand Up to Trump” rally outside the White House last month, criticizing President Trump for breaking his promise to address the problem.

“On the campaign trail, he promised he would fix Flint. Unfortunately, this was one promise that he failed to keep—just like his promise to ‘Make America Great Again,’” Truong said.

“Little Miss Flint” first made headlines last year after she sent a letter to President Obama inviting him to come see the damage caused by the lead poisoning. Obama replied and visited the city, even meeting with the youthful activist.

In many cases, the stories of suffering from Flint residents seem to be unbelievable in a country like America, given its level of resources. One senior citizen who has lived in Flint since 1963 says she feels abandoned and confused particularly after receiving a water bill for $1099.09 which officials from the water department alleged was issued to her because she had been “undercharged.”

“I’ve written letters, I’ve gone to the city’s Board of Review, I’ve called on my city councilmember—I’ve gotten nowhere,” said Mary Huddleston, a 76 year-old widow who lives alone and says she barely uses any water at all.

Huddleston continued: “I keep making payments each month—just enough to keep the water on so I can flush my toilet, but I don’t wash much and only shower once a week. My hair began coming out from using the shower so I have to do it with bottled water that the city gave us. One day my water bill was $151. Then, after new meters were installed, it jumped to over $1,000.”

Huddleston has been diagnosed with several respiratory illnesses and said that she believes the illnesses are a result of drinking and using the contaminated water.

“I feel like I’m being forced to pay other folks’ bills—and for water that’s still contaminated,” said Huddleston.

Since a federal state of emergency was declared in January 2016, Flint residents have been instructed to use only bottled or filtered water for drinking, cooking, cleaning and bathing. Earlier this year, officials said the water quality had returned to acceptable levels.

However, residents continued to be told that they should use bottled or filtered water until all the lead pipes have been replaced—something that won’t be completed any sooner than 2020— in another three years.

“Flint will soon become a ghost town,” Huddleston said. “But I can’t go anywhere. I have nowhere to go. They talk about all this money being donated to help us. I don’t know where it’s going, but I sure haven’t gotten a call.”