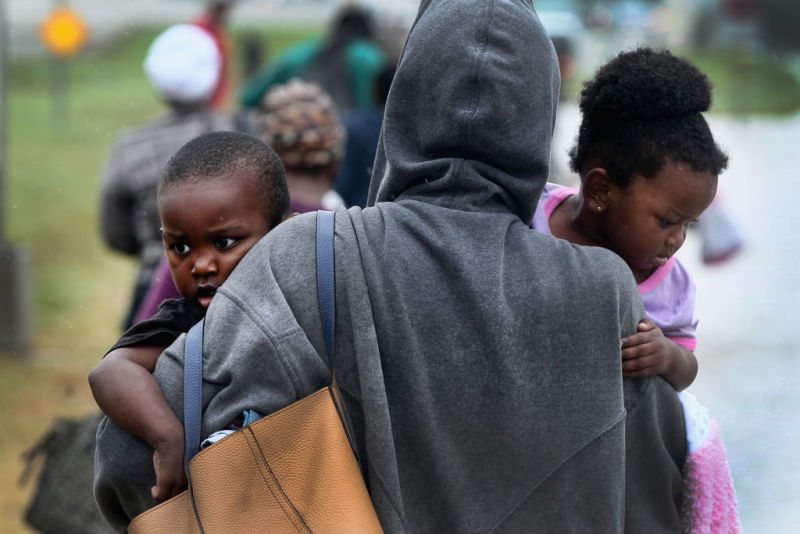 They were all in the eye of the storm when Hurricane Harvey hit.

“It’s really that bad,” Thierry, a single mom of a 4-year old, told The Root.“My house got hit, too; there’s mold everywhere. But I just really don’t have time to think about that; I’ve got to make sure my people are taken care of.”

But as millions upon millions of dollars roll in from a growing lineup of celebrities, athletes and a nation of sympathetic Americans eager to save #HoustonStrong, there’s no guarantee that much of that money will reach already economically battered Houstonians who need it most.

As government and nongovernmental agencies transition into the recovery phase, there’s growing skepticism that they will prioritize black and brown folks dealing with the compounded devastation from generations of dire economic straits—and, now, climate-change-instigated “1,000-year” floods.

Already, the push to focus on property rather than the dispossessed is becoming abundantly clear. During a press conference laying out recovery efforts, Federal Emergency Management Administration acting Director Brock Long was weirdly emphatic on the property part: “ .... and the most important thing, the mission of saving houses.” No one seemed to pick that up.

Meanwhile, Houston-based Forbes Senior Editor Christopher Helman wasted no time calling for a FEMA “buyout” of flooded homes, which is really a rallying cry for full-scale property-owner windfall and redevelopment: “Buying up the deepest corners of the floodplain makes enormous sense. Landowners get enough money to start over somewhere else.”

Yet more than 40 percent of Houston residents actually rent. Since they won’t be getting a buyout, what happens to them?

“Honestly, there are a lot of folks down here in Texas who have no problem that this hurricane hit,”� said Rickie Keys, a national financial literary advocate and founder of WhenEndsDontMeet. Keys, along with his family, was displaced to Texas in 2005 by Hurricane Katrina. “These people view this as an economic boon. This as a major economic-development opportunity. Think about Katrina. That was an economic boon for the New Orleans area—but only for certain areas and for certain people.”

Still, the raw emotional reaction for most Americans is to get online and dump donations into the Red Cross. But historically, Red Cross money doesn’t always find its way to hurting black folks. That comes from experience: When Katrina hit, black residents watched Red Cross dollars flow more easily to white areas than harder-hit black ones. A ProPublicainvestigation exposed “understaffed”� and “mismanaged”� Red Cross shelters in majority-black Baton Rouge, La., after historic 2016 floods. Another ProPublica piece found that the Red Cross only built six homes in earthquake-ravaged Haiti after claiming that it provided 130,000 people with housing—yet, again, another place full of black folks receiving inadequate disaster response.

“Many of my constituents already lived in underserved communities,”� added Rep. Thierry, who oversees a district where 34 percent of residents ages 25-64 are not in the labor force. “They are now completely displaced and almost destitute. I want to make sure that when it comes to charitable donations to the Red Cross, and other well-known nonprofits, that Houston does not become another Haiti.”

Thierry took matters into her own hands, opening up her district office as a base of operations and setting up a GoFundMe page to raise needed funds for resources.

Yet, Instagramming and tweeting black celebrities like Kevin Hart and former President Barack Obama earnestly egg the public into one big national telethon for the Red Cross. Crazy amounts of cash are heading straight to organizations that won’t be prioritizing anyone black or brown, least of all those who don’t own a home.

It’s not as if the $250,000 Tyler Perry line-itemed to embattled megachurch hustler Joel Olsteen (out of a total $1 million donation) will be relayed to Thierry’s district or anywhere else underwater where residents never had the assets, bank accounts or credit cards to begin with.

And even with Beyoncé’s heart-in-the-right-place move, BeyGoodHouston, as a relay center for Houston organizations Bread of Life and Houston Mayor Sylvester Turner’s Greater Houston Community Foundation, giving to those most in need is not as simple as one might think. Both organizations will be wary of showing favoritism to any one demographic; a Houston advocate hesitated in stating that GHCC was going to be a reliable source of funding for the area’s vulnerable.

“It’s a good cause, of course, but Mayor Turner is going to have to focus on everyone in Houston,”� the advocate told The Root. “And, unfortunately, that’s not always going to be the people hurting the most.”

Worse yet, the broader national African-American community wants desperately to help brothers and sisters in need but is reluctant to put its dollars into big-box mainstream efforts. Many, like WURD Radio President and CEO Sara Lomax-Reese, have started public donation drives, but they want those dollars going to local community-based organizations instead.

“We are still trying to identify a specific local organization that we will send it to because we really want to make sure it gets to the most-vulnerable residents,”� Lomax-Reese told The Root. “Philadelphia is the poorest big city in the United States, so black Philadelphians are especially empathetic to the struggles of low-income communities and individuals. We want to make sure that’s where the money is going.”

A large part of the problem, in the case of Houston, is that the local front-line community service organizations that do focus on underserved black and brown residents were also affected by Harvey.

At last check, the Houston NAACP president was living out of a hotel with his family. The Houston Area Urban League president was out of pocket for a few days and finally surfaced—but, the entire HAUL staff has been displaced, making the offices empty for a time. The Houston Urban League typically dedicates itself to those exact needs for vulnerable residents.

On Friday, HAUL got back online, and is now accepting donations for its Harvey relief efforts. And in the meantime, sister-affiliate the Greater Washington Urban League has sprung into action to fill gaps.

“Too often, during major disasters like this, the most vulnerable are ignored and left to fend for themselves,”� GWUL President and CEO George H. Lambert told The Root as the organization initiated a supply and fundraising drive this week. Those resources will be relayed immediately to the Houston Urban League. “We’re here to alleviate that burden as best we can, and look forward to helping our people in Houston do all that they can do to ensure resources reach those most in need.”

But, generally, it’s also the continued issue of either poor planning or an inability to quickly respond by national black organizations that fail to position themselves effectively when disasters happen.

“Rather than just blindly giving in the immediate aftermath of a tragedy, now is the time for networks of black fraternal and professional organizations to build a national philanthropic arm,” argued Khalilah Brown-Dean, a political science professor at Quinnipiac University. “That arm can coordinate capital and resources such as technology, communications, social services and health. We have to build infrastructure in advance of and not in the midst of tragedy.”

New York state Sen. Kevin Parker, who has seen his share of Superstorm Sandy relief-and-recovery efforts, agrees. “This is a constant concern of mine,”� said Parker, who has been actively highlighting climate change issues as chair of the national Council of State Governments’ Council of Communities of Color. “It’s a reminder that myself and other legislators of color have an obligation to play our part by enacting legislation that will benefit the communities we serve.”

Explained Vien Truong, CEO of DreamCorps, a national environmental justice project, to The Root: “For decades, poor communities in Houston have been living with extreme pollution from Houston’s many chemical plants and refineries concentrated in black and brown neighborhoods.”�

“Now those same communities are being battered by climate change through extreme flooding from Harvey,” Truong contined. “The wisdom to rebuild from this storm, and from the fossil-fuel industry’s damage, is in Houston: Communities on the front lines know best how to support their neighbors and rebuild the local economy.”