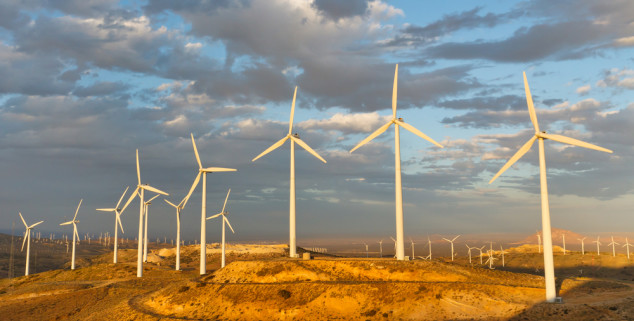 Perhaps like many Americans, I was struck by the sight of Pope Francis standing in front of Congress talking about climate change with Speaker John Boehner on one side and Vice President Biden on his other.  It made me wish California was on the Pontiff’s itinerary.

He rode in a small, fuel-efficient car in the midst of a Secret Service convoy of giant gas-guzzlers.  He had a lunch date with the poor and homeless on the same day he spoke before all of Congress.

California is showing the world that you can cut pollution and grow the economy, while helping families—at all socio-economic levels—build better lives.

This is a man who walks his talk.  So too is our state.

We are cutting per-capita carbon pollution dramatically while growing our state’s economy. Now, for every dollar of goods and services we produce, we emit less carbon pollution than any other major economy except for nuclear-powered France.

Contrary to fear-mongering by some politicians, California has cut emissions by 25 percent while growing our economy by 37 percent over two decades. In March, Bloomberg News named California the #1 state to do business with our companies in the S&P 500 outperforming those in the rest of the nation, delivering returns 52 percent higher than the nearest competitor. And, last year,thanks in part to its growing clean tech sector, California created more jobs than any other state in the nation.

For everyone who breathes, California’s clean air laws have cut cancer risk from exposure to the state’s most significant air pollutants by 76 percent over the last two decades. Who knows how much money this has saved, but we can imagine how much heartache and loss it has prevented.

The fastest way to meet our carbon pollution reduction goals is to make clean energy cheaper and more available for all.

This didn’t happen by accident. Thoughtful policies — borne of our first-in-the-nation cap on greenhouse gas emissions (AB 32), crafted with input from stakeholders across the state and defended at the polls by millions of voters — have been essential.

I want the Pope to see what California is doing for himself.  Through pioneering climate and clean energy policies, California is showing the world that you can cut pollution and grow the economy, while helping families—at all socio-economic levels—build better lives.

But we can do even better.

The state’s top air regulator, the California Air Resources Board, is collecting input for the AB 32 Scoping Plan’s next set of policies designed to reduce greenhouse gas emissions 40 percent by 2030 and increase renewable energy to 50 percent of our electricity generation.  I wish the Pope could stand us in the room to focus attention on making clean energy affordable and accessible to all. We must continue to make sure that everyone – whether in the C-suite or on the assembly line – benefits from California’s world-leading efforts.

One critical effort that must continue is California Climate Investments program, and more specifically, the funds allocated by SB 535 (de Leon) which are designated for communities disproportionately impacted by pollution. Investing these funds wisely will lead to local health benefits and jobs for the people who need it most.  As the next generation of policies are designed and targets are determined, California must recognize that the fastest way to meet our carbon pollution reduction goals is to make clean energy cheaper and more available for all.

The Pope understands the potential for clean energy to make the world a more equitable and democratic place. Imagine the poor in developing countries free of despots whose wealth and power comes from owning and controlling energy.  Imagine people generating their own electricity from solar, and saving on energy costs, which can be as high as 40 percent of their income in many countries. Imagine that just as these countries skipped over landlines and went straight to cell phones, they can leapfrog over centralized fossil fuels to distributed clean energy.

If the Pope came to California, he would see that this vision is within reach—and that California is leading the way.

—
Ed’s Note: Vien Truong is the chief operating officer of DreamCorps and national director of Green For All, a California-based national initiative building an inclusive green economy strong enough to lift people out of poverty.