What's the business case for embracing the have-nots? 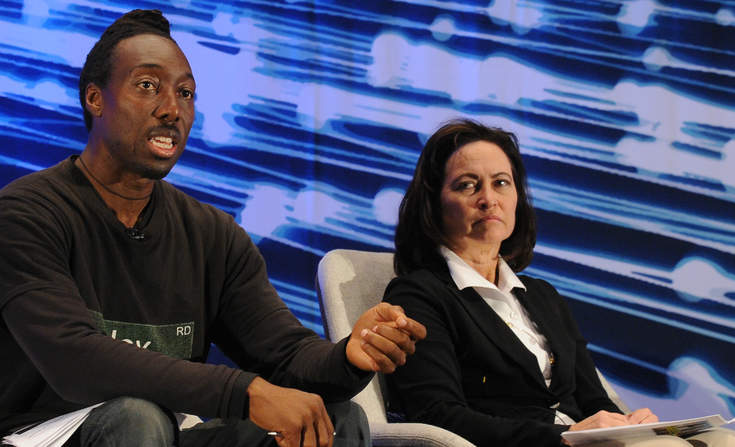 Are climate change and economic inequality the two greatest issues of our time? That’s what Antwi Akom says. The Oakland, California, nonprofit leader has a message for big business: Engage the communities you’re overlooking. He isn’t alone in seeing these forces as radical opportunities for companies, yet few heeding the call.

Many professionals who enter corporate sustainability — our core readership at GreenBiz — do so because they view corporations as among the world’s most powerful institutions. They want to work from within to make change on a vast scale. It is this audience that Akom hopes to rattle and reach.

He was in good company at the GreenBiz VERGE event last week in San Jose, California. Akom co-founded i-SEEED, a nonprofit that seeks to solve urban problems through tech. One of its projects maps community services through an app called Streetwize. Social justice wasn’t an official conference theme — most discussions centered around things such as clean energy and water, as well as resilient cities — but it brought the audience to its feet in one standing ovation after another.

In the "triple bottom line" view of business involving people, planet and profit, our stories at GreenBiz tend to cover the latter two "Ps." However, implicit in our focus on the tools, trends and structures that promise to disrupt and further corporate sustainability is the assumption that ultimately it’s all about people. What does the state of carbon emissions mean for our future as carbon-based life forms? How will communities and individuals experience the climate shock and displacement that lie ahead? 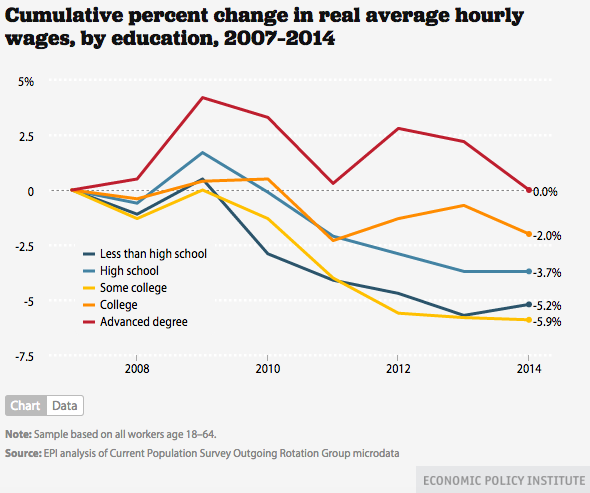 Income inequity bothers even billionaire Tom Steyer, founder of NextGen Climate, who noted a "crazy" drop in wages for most Americans, especially since 2008. Wages and productivity rates are no longer connected as they were in the 1970s. "As businesspeople, we need to be speaking out" and collectively decide what kind of future we want to have, he said.

Steyer described recently spending a day with tomato pickers. "I promise you those people are working their asses off," he said. "The deal they’re getting back from society is not one people are actually seeing."

It’s about jobs, for starters

The promise of greener, cleaner jobs lifting masses out of poverty has stalled since Van Jones co-founded Green for All in Oakland in 2007, before the Great Recession. Now a CNN pundit with the role of White House green jobs czar on his resume, he joined Steyer onstage at VERGE, driving his point home yet again.

If you’re trying to find a way to build a great, beloved company that can compete for market share and hearts and minds, we know where the talent is.

"We need jobs, not jails for our young people," Jones said. "We have a tremendous amount of wasted genius ... If you’re trying to find a way to build a great, beloved company that can compete for market share and hearts and minds, we know where the talent is. They just need a shot."

Could the Clean Power Plan recently passed by President Barack Obama provide one such shot? It not only orders states to reduce the carbon emissions of power plants, but it also includes rules intended to benefit low-income communities. It will reward states for improving the rates of renewables and energy efficiency in such communities, while encouraging green job training.

That is only one force accelerating what many at VERGE saw as an inevitable shift to a next-generation electrical grid beyond fossil fuels. This transformation "is part of a prosperity agenda unlike any we’ve seen before," said Graham Richard, CEO of Advanced Energy Economy.

Elizabeth Brinton, corporate strategy officer at PG&E, described opportunities in economics, finance, supply chain, advanced data science and cloud computing — as well as in trades, such as journeymen or line crew gigs. "Whatever your interest, whatever your degree or whether you want to go college or don’t want to go to to college, there’s a job for you," she said. "This is about creating a rising tide that lifts all boats."

The rising tide of open platforms

Techno-optimists often talk about power of open data to understand the previously unseen, and to scale the solutions for lasting change. The smartphone is the platform for participation in what Zipcar founder Robin Chase calls PEERS Inc, a vision of how tech tools and crowdsourcing can reinvent business. After all, building an app (or using one) is easier than building a handset.

"Who needs experts?" she said. One of the "miracles" Chase sees is that "when you’re working with a diversity of peers, the right person will appear."

In other words, shared, networked and open systems can drive exponential rather than linear change, and as we move from an industrial economy to a collaborative one, people will flock to their hive of choice. In theory, this opens untold opportunities for otherwise neglected communities to participate economically.

We have to make sure your technology is as ubiquitous as Air Jordans.

In Cuba, for example, Airbnb had 2,000 listings just six months after Obama normalized relations with the nation.

"If data are not connected, not moving, then you are leaving value on the table — and this is very much a cultural shift," said Gavin Starks, CEO of the Open Data Institute.

The ODI has collaborated on bottom-of-the-pyramid, tech-driven efforts —  such as helping smallholder farmers in Ghana access weather and market advice via text message, and helping farmers in Colombia combine harvest and weather data to prevent losses to rice crops, saving millions of dollars.

Ev Williams grew up on a Nebraska farm and taught himself to code. But he has become one of the "1 percent" after founding Twitter in 2006 and Blogger in 1999.

"With both Blogger and Twitter the goal was to lower the barrier to putting ideas out into the world," he said. Enabling people to find others, like-minded or not, facilitates discourse. Now CEO of the Medium publishing community, he’s hoping to "give ideas a fighting chance in a world that has too many ideas."

Social media enable people to share more than ideas, as millions of users of crowdfunding platforms attest. One example: Kiva, the peer-to-peer lending site built to help small businesspeople in parts of the developing world, has come to the United States as Kiva Zip.

What if you don’t have a smartphone? For all the talk of apps and maps, Anti Akom calls the human element the true "software of change." All those cloud applications have to reach people on the ground.

Social cohesion is key for resilience in cities, according to Oakland Mayor Libby Schaaf. Resilience must "recognize the interconnectivity of everything," she said. "When we approach public safety ... we have to approach it holistically. I’m not going to have a safe city if there’s huge income inequality. ... Having social cohesion is the most important thing you can do to prepare for an earthquake."

"We saw in New Orleans when the levees broke, part of the problem is people did not trust government," Schaaf said. "The point of resiliency is not that you’re going to avoid the earthquake; it’s about how you’re going to bounce back."

Michael Berkowitz, of the Rockefeller Foundation’s 100 Resilient Cities effort, works to install chief resilience officers around the world. He noted how in Paris, the mayor initially wanted to talk about "typically green topics" such as air pollution, the heat-island effect and flooding. The Charlie Hebdo attacks later broadened the topics to where new immigrants came from and why they settled on the edges of the city, which became a conversation about sustainable transportation.

"What we’re doing is trying to get those conversations to happen at the same time," Berkowitz said.

Aside from building trust and community, and taking an integrated view of the forces that shape communities, how can more green technologies reach underserved neighborhoods? It can start with harnessing social media, but lowering the barriers to entry in terms of cost is also critical for spreading the adoption of things such as solar panels.

"We have to make sure your technology is as ubiquitous as Air Jordans," said Vien Truong, chief operating officer of Green for All. "Get your technology out on the streets."

Providing examples of real-world usage can help to normalize green tech. Akom described a bike-sharing program in Minneapolis that gave high-end bikes to community leaders, who started riding around, and "catalyzed the belief [for residents] that we can all use the bike-sharing program in this way," he said. "It’s that kind of local knowledge that’s driving the change that we need, and the change that we want to see."

In a partnership with e-scooter maker GenZe, Oakland announced last week it will be the first city to offer solar-charged electric bike stations, which are coming to Jack London Square.

Why aren’t we taking our infrastructure improvements to neighborhoods that are the recipients of stress?

Schaaf applauded, and pointed outside the VERGE ballroom to interactive light sculptures from San Francisco’s Future Cities Lab, which reflect real-time data from live streams, such as public transportation usage or Twitter. The lab is working on a project to light up dim train underpasses in Washington, D.C.

"Why aren’t we taking our infrastructure improvements ... out to neighborhoods that really are the recipients of stress," such as low graduation rates and high crime, asked Schaaf. "We need to give gifts of government intentionally to these stressed communities."

Working alongside at-risk youth, self-described "people farmer" Stephen Ritz turns some of the most forgotten corners of the South Bronx into literal green spaces. His Green Bronx Machine has cultivated more than 100 farms in schools. Ritz is now transforming a library in neglected Public School 55 into a farm to grow 100 bags of groceries a week. He aims to scale this into a national program, and invited the business audience to participate.

"I grow vegetables, ladies and gentlemen, but my vegetables grow children, they grow communities," said Ritz. "I ask you what are you growing? What is your farm? How can you grow something greater?"