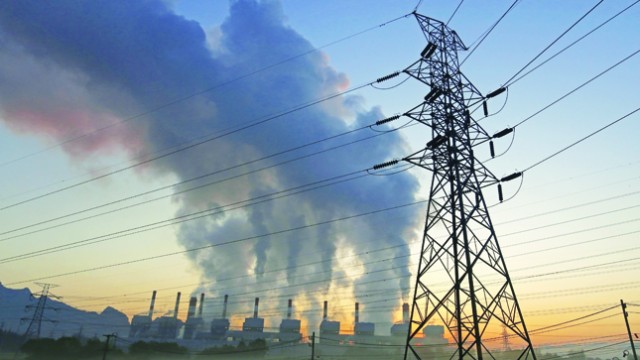 An initiative to pass the first carbon tax in the country is dividing environmentalists and spurring opposition from environmental groups who have long backed such proposals.

Washington voters will decide next week whether to institute the nation's first tax on carbon emissions. Proponents say it will help reduce the prime driver of climate change and reform a regressive tax code. And supporters have long seen the Washington measure as the first step toward a national carbon tax.

But it's facing surprising opposition from many environmentalists, who have long called for a carbon tax to combat climate change.

They have serious concerns about the ballot question, Initiative 732, in particular how the plan handles projected tax revenue.

Any new money from the carbon tax will go toward lowering other taxes in the state rather than raising money for potential carbon-cutting investments, such as clean energy projects or improved mass transit.

Opponents also point to projections that the tax would lead to millions of dollars in lost revenue. That’s a worrying thought for environmental justice activists who say the budget hole will lead to fewer government services for the poor.

“I have never, ever opposed a single climate bill,” said Van Jones, a Democratic strategist who advised President Obama on environmental issues, told opponents of the initiative on Thursday.

“I have never opposed any climate proposal at all, but I am opposing this one because it is that bad.”

Supporters of the measure, though, insist that the revenue plan is a feature, not a bug.

Because carbon taxes can raise prices for businesses and consumers, the plan aims to lower other taxes on companies and boost a state low-income tax credit.

“The carbon tax is the environmental part of the policy. The way to get less pollution is to make polluting expensive,” said Yoram Bauman, the founder and co-chairman of Carbon Washington, which is pushing the initiative.

The reductions in other taxes, he said, “are ways to [lessen] the impact of the carbon policy on households and businesses across the state and make the state tax system fairer and more sustainable.”

Bauman’s group secured the signatures necessary last year to get the carbon proposal on voters’ ballots, a feat Carbon Washington accomplished even as other climate initiatives — like a cap-and-trade plan from Gov. Jay Inslee (D) — faltered in the Legislature.

The proposal is structured after a carbon tax in neighboring British Columbia that, supporters say, reduced emissions and had a minimal impact on the Canadian province’s economy. Washington’s plan, if enacted, would have notably higher ceiling for carbon emissions than British Columbia's.

The proposal’s tax structure has a political angle as well. Organizers hope it will attract support from Republicans who might not otherwise support a climate plan.

“In some cases, the elected leaders or the people who have the microphones — on the right, I think some of them are still in kind of in climate-denial land, or at least that’s their public posturing,” Bauman said.

“But when you actually sit down and talk with folks, especially off the record, they say, yeah, climate change is real and we should come up with a plan to do something about it.”

Public polling on the plan is sparse, but a survey in early October showed 42 percent in support and 37 opposed, with 21 percent undecided.

But green groups have come out swinging against the measure and both sides see Tuesday's vote as crucial for the future of carbon pricing.

The Sierra Club’s Washington chapter said “the initiative fails to affirmatively address any of the stated needs of [minority and low-income] communities: more investment in green jobs, energy efficiency, transit, housing and renewable energy infrastructure” in a statement.

Washington Conservation Voters piled on, saying they support "putting a price on carbon pollution because it is a fundamental driver for the transition to clean energy, but it’s critical that we get climate policy in Washington right the first time."

National environmental and labor groups lining up against the proposal insist they support carbon pricing. They say that Washington's plan just gets the details wrong.

“We can and should put a price on carbon,” said Vien Truong, the director of California-based Green For All. “But we must invest that money back into making sure the communities have real environmental solutions ... and creating good jobs.”

Bauman, though, said he expects individual grassroots activists to support the measure even if green groups don't. And Carbon Washington has secured support from other organizations, as well.

“We have consistently said ...  that we are going to work on any good bipartisan climate policy, anything that will reduce carbon emissions causing climate change,” said Gail Gatton, the vice president and executive director for Audubon Washington.

“We gave this a good hard look and evaluated whether it would do what good climate policy should do, which is reduce carbon emissions.”

Supporters hope the measure, if approved, will be a model for the rest of the country.

“So many doors swing open or get blown off their hinges if this can win,” Carbon Tax Center director Charles Komanoff said.

“It means that a [Hillary] Clinton administration, if there is one, immediately has its sights lifted from piecemeal, small-bore stuff ...  to landscape-changing, sky’s-the-limit national carbon taxes.”

Komanoff dismissed the rift among environmentalists over the Washington plan, saying there was no erosion of support for carbon pricing.

“If we do actually win next week, I think the implications nationally are going to be huge,” said Baumann. But he also expressed worries about the blame game if it fails.

"They’re going to look at Washington state and go, ‘Oh, if the environmental community wants to kill the best climate policy in the world, then I guess they can do it.' "