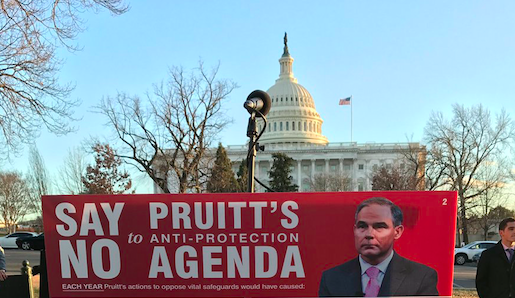 President Trump’s recent trip to the Museum of African American History and Culture with black allies in tow, Omarosa Manigault and HUD Secretary nominee Ben Carson, obscures the fact that his policies are poised to set back the very communities he claims to want to help.

Look at what we know about the environmental vulnerabilities communities of color face:

The United Church of Christ found in its report Toxic Waste and Race at 20 that 40 of the 44 states with hazardous waste facilities have disproportionately high percentages of people of color living within three kilometers of those facilities.

When the EPA finalized its coal ash rule in 2015, it noted that communities of color and low-income communities are more likely to live downstream from coal ash impoundments. Coal ash, the refuse of coal burned to generate electricity, is the second largest from of industrial waste and is linked to the four leading causes of death: cancer, heath disease, respiratory disease and stroke.

People of color even breathe worse air. A University of Minnesota study from 2014 found that minorities breathe more polluted air and are more subject to nitrogen dioxide, produced by cars and heavy industry and linked to asthma and heart disease.

He has made it clear that he wants to drastically reduce the size of the EPA and limit its ability create new regulations. Newly confirmed EPA administrator Scott Pruitt has spent much of his career suing the EPA and working with polluters to attack environmental standards. He wants to shift regulating power away from the federal government.

Groups that work to protect the environmental health of communities of color see danger in this agenda.

Green for All, which focuses on building a green economy to lift people from poverty, recently condemned the confirmation of EPA Administrator Scott Pruitt as a great setback for the most vulnerable communities.

Any day now, Trump is expected to sign executive orders that will allow greater greenhouse gas emissions and reduce protection of the nation’s waterways.

Limiting federal environmental protections will harm the health and well-being of all Americans, but low-income communities and communities of color, who have made headway in addressing the environmental disparities in recent decades through such initiatives as EJ2020, can expect to see the rug cut out from under them as environmental regulations are gutted.

Trump has shown no interest in the environmental health of Native Americas. Last month, he signed an executive order, calling on the Army Corps of Engineers to expedite approval of the Dakota Access Pipeline, a controversial near 1,200-mile crude oil pipeline that would cross underneath the Missouri River and threaten water the Standing Rock Sioux Tribe depend on while impacting the tribe’s cultural and sacred sites. Opposition to the pipeline sparked nationwide protests in the summer and fall, galvanizing Native Americans around the country, and garnering support from the Obama administration which indicated the pipeline would exacerbate climate change.

But, to Trump, the only thing that matters is paving the way for coal, oil and natural gas and the job growth he thinks it will bring. Has he ever given a moment’s thought about which groups would bear the greatest health burden from his anti-regulatory plans? I doubt it. And communities of color will pay the price.