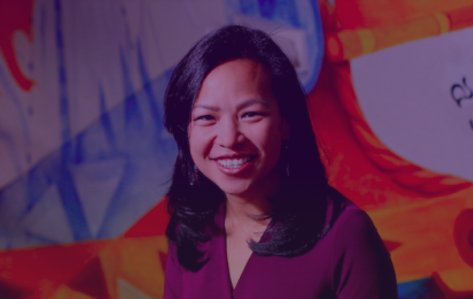 The Oakland-based activist is the Director of Green For All, a national initiative to build an inclusive green economy strong enough to lift people out of poverty. She has led state policy and grassroots efforts to create programs that direct billions of dollars into communities most vulnerable to climate change, create clean transportation choices for low income families, and empower people most affected by environmental racism to connect and work together to change their communities. Vien has received congressional, state, regional and local awards for her work on behalf of low-income communities and communities of color, and was recently honored with the White House Champions of Change for Climate Equity Award.

Growing up the youngest of 11 children to a refugee family that fled war torn Vietnam for a heavily polluted area of California, Vien learned early on about the impacts of economic instability and environmental degradation. Her own experiences were fundamental to her deep commitment to fighting for disadvantaged communities and seeking innovative solutions to colossal problems.

For this week’s Feministing Five, I caught up with Vien to discuss her passion for economic justice, her landmark achievement of passing a community reinvestment bill in California, the specific struggles of low income families in her community, and how a scrappy group of passionate activists do in fact have the power to profoundly change their world. Catch up with Vien on Twitter @Viendetta!

Senti Sojwal: How did you get your start as an environmental justice advocate?

Vien Truong: I grew up in Oakland, California, one of the poorest and most polluted communities in the country. It was also the murder capital of the country in the ‘90s, when I was growing up. It became normal to me to feel like my community had such high levels of violence and of poverty. When I traveled to live with my sister for a little in Massachusetts, I saw how different those communities were, and how there was a different possibility for what schools can look like, what access to books you might have, access to green space. It really changed my perspective. For the first time I really understood that what we were seeing in East Oakland was not normal, and I wanted to figure out how to begin creating solutions for these communities that have been disadvantaged for so long. I didn’t learn about environmental justice immediately, I first started working in affordable housing, because I thought the housing situation was pretty poor, so maybe if that gets better, people can live and breathe a little easier. I saw that it was really about people who couldn’t afford a better way of live in Oakland, couldn’t afford a better community. So then I started thinking more about economic justice. I began working in law and policy and thinking about how to build better community centers, better resources, and jobs for people. Then I stumbled upon Green For All, and they were working on not just jobs and economic growth, but they were thinking about the overall health of the community. The air you breathe, the water you drink, and that was really captivating. So I’ve been doing that the last eight years!

Senti Sojwal: You’re currently working on the Clean Power For All Solutions Series in response to the EPA’s Clean Power Plan with a coalition of climate justice leaders, environmental groups and economic justice groups. Can you tell our readers more about this initiative, and how they can get involved?

Vien Truong: Our president introduced the Clean Power plan a year ago, and it gave an opportunity for us to being seeing a possibility for states to reduce their emissions from existing power plants, which is really exciting. We see this as really connected to poverty and inequality. This Clean Power for All group came together and said, how do we bring together the best minds and the best ideas that this country has seen in recent years to really begin accelerating the things that are already working? Together, we’re some of the strongest organizations doing this work. People who really represent a diversity of organizations — Sierra Club, National Housing Trust, Partnership for Working Families, Clean Energy Works, Center for Community Change, and more. We put together a toolkit, which is on www.thecleanpowerplan.com, and these are the best cases we’ve seen of investing in disadvantaged communities. We want to make sure those communities have a meaningful voice in the process. We’re talking about how to ensure that people have access to good jobs, that we’re accelerating economic growth, that we’re investing in clean energy. By good job, I mean a job that pays a fair, living wage. We want to build local economies. People can join through our website and stay engaged there. For me, growing up in Oakland, I was the youngest of 11 kids and my father worked in sweatshops my whole life. I knew that we were struggling, but I didn’t know that in California we also had some advantages. It wasn’t uncommon to have lawyers in nonprofits working here. That’s not so common in middle America. In my travels, I began to hear organizers who said, we don’t even have the capacity to organize around these issues, or the technical expertise. This toolkit exists to begin arming people with the information they need, but also to connect people so that we can work together to organize around these issues, they can connect with the experts, and we can help out.

Vien Truong: So many ways. In East Oakland we have one of the largest ports in the country. They ship goods from China, and they go to distributors all over, like Walmart and stores across the country. That’s a lot of trucks, and a lot of ships. The pollution gets into the lungs, into the heart. It can create asthma, trigger heart disease, all kinds of other pollution-related problems. We also see the increasing cost of relying on fossil fuels taking a toll on our families. It takes a toll on the cost of transportation, on our ability to access jobs that are more than an hour away. In places where we’re seeing rapid gentrification, having to travel a mile away and rely on these gas and oil prices is beginning to hurt. It really takes away from the savings of low-income families. We’re beginning to see families who have to sacrifice the cost of healthy food versus paying for their energy bill. These are things you shouldn’t have to change — you should be able to have both. We see families who live by refineries, and don’t see a solution the refineries having flares, small explosions, pollution, contamination into groundwater. These are things we need to clean up. No one should have to sacrifice the health of their family to make a living.

Senti Sojwal: One of your landmark accomplishments is the passing of Senate Bill 535, a community reinvestment bill in California that created a polluters pay fund, which created the largest fund in history for low income communities to green up and to create economic revitalization for residents. Can you tell our readers more about the process of passing the bill, and what the experience was like for you?

Vien Truong: The bill was passed with myself and a group of friends, and this scrappy group of people just believed the impossible could happen. The interesting thing about this group, which included five organizations, is that it was very diverse, and it was primarily people of color. When you think about the climate movement, you don’t usually think of it as being led by people of color. This coalition, however, included Shankar Prasad, a doctor from India, Nidia Batista, a Latina from Sacramento, myself, a Southeast Asian from Oakland, a staffer from NAACP, and NIDC, a traditional environmental organization. That’s quite a diverse group of interests and backgrounds. We came together and said, there’s something happening in California where polluters are going to have to reduce their pollution and if they can’t do it fast enough, they need to pay for the amount of pollution they emit over the cap. That’s going to create a lot of money, so let’s make sure that money goes right back into those communities that have been paying for this with their health and their lives. We got a Latino environmental justice lawyer to introduce the legislation, and together this ragtag group of people were able to pass what became the biggest fund in history for low-income communities. In the first year, it created $272 million, and the second year, nearly $600 million. We’re seeing rapid growth in this program and by the time we get to 2020, it’ll be somewhere between $4 to $12 billion. It’s huge! The money only goes to the most polluted areas of California and areas with high poverty levels. This program is also huge because policy makers don’t often talk to the people most impacted by these issues. They don’t go to them and say, so what do you think should happen here? Policy happens in a bubble. After this policy was passed, we went back to the community and took a year to do town halls, webinars, meetings, workshops to ask — where do you want this money to go? We got everything that the community asked for when we finally implemented. The things they asked for are things that improve their quality of life and reduce their cost of living. They identified affordable housing, free energy efficiency programs, free bus passes, improving public transport. We heard from someone in Huron, where 1 in 4 people have asthma. If you have an asthma attack and you don’t have a car, you have to travel on a bus four hours each way to get to the hospital. Most people who are migrant farm works out there don’t have cars. So what they do is go to a guy in a diner who will take you to the hospital and back for $65 a trip, plus the cost of his meal. I mean can you imagine being a mom and knowing that’s your source of transportation? So we were able to fund vans for people to get back and forth from the children’s hospital. They can also the vehicles to go to the grocery store. We’re really proud of stuff like that. In Fresno, which has terrible air pollution, we got a woman free solar panels on her rooftop. She was struggling to make ends meet, going through some hard times. Her electricity bill dropped from $200 on average a month to $1.50 on average a month. We got 1800 solar panels out to families the first year. Families can really be transformed by this.

Senti Sojwal: What is your hope for how Green For All can continue to grow and support communities of color in the future? What’s next on the horizon for you?

Vien Truong: We want to accelerate the solutions we’re seeing. We know that people can’t wait. We lost seven million lives a year in this world because of pollution. At the same time, we have increasingly growing inequality. We have to accelerate solutions. We want to work together with other people who are also impatient to create big changes. We don’t have enough intersectional work around addressing housing, transportation, pollution, reproductive justice, and all these things matter. All these things are touched by climate change. I want to figure out how we can bring people closer together. Fear drives so many of our national conversations right now, and I want to make sure that we are also bringing in solutions and hope.