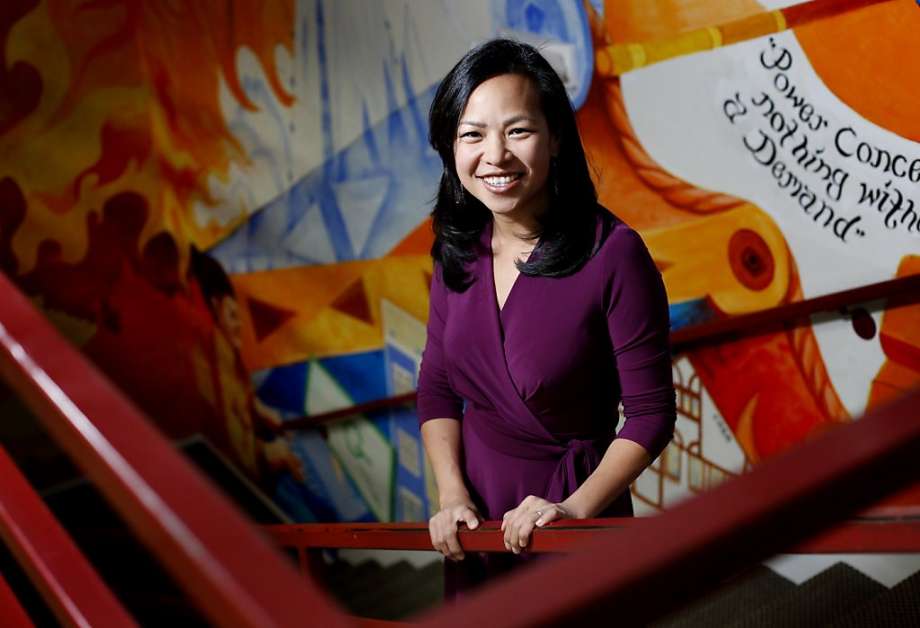 As part of the United Resistance campaign, groups pledge to work together across issues, unify respective networks, and function in a multilateral fashion that provides a better future for America than Trump is offering. The campaign is launching the same week as the involved organizations are leading various initiatives to block Trump’s cabinet appointees including Secretary of State nominee Rex Tillerson and Attorney General nominee Jeff Sessions.

More than 50 organizations have signed onto the pledge and several are featured in the video.

“Trump is not on the side of the American people. After promises of “draining the swamp, his cabinet is now full of more billionaire lobbyists and executives than any administration in history. This President will never know what it feels like to worry about the water his family is drinking, to wonder if his house will survive the next superstorm, or if his child will face hateful bullying at school. It is up to each one of us to protect each other, to fight for each other, and to resist the ways in which Donald Trump threatens America,” said Greenpeace USA Executive Director Annie Leonard.

"The American people elected Hillary Clinton president by a nearly three-million vote margin. The 48 Democrats in the new Senate received over 78 million votes combined, compared to the 55 million earned by the 52 Republicans. The American people have clearly rejected the GOP's values of hate, intolerance, greed and bigotry, and we are proud to stand with the American majority in fighting for inclusion, tolerance, compassion and hope."
- Markos Moulitsas, Founder and Publisher of Daily Kos

“Our movement to advance the fundamental values of justice and democracy, for the empowerment of immigrant and refugee communities, for Muslims and other religious minorities in the United States is ready to protect our families, to assert our presence, and to challenge our nation to live up to its values as a nation built by immigration.  I’m heartened by the energy to resist in our own communities, and by the broad coalition of movements coming together to stand and defend each other, whatever the Trump Administration throws at us.  At stake is a vision for our nation and world grounded in racial and social justice, committed to improving the lives of every American, and realizing a healthy and diverse future where everyone can thrive.  We stand with our sisters and brothers in the intersections of racial, economic and climate justice.”
- Rich Stolz | Executive Director | OneAmerica

"Solidarity forever must include solidarity now -- intensive, sustained and determined to defend past gains as well as make future ones possible. Everything that we hold dear is at stake." -Norman Solomon, Coordinator, RootsAction.org

“Green For All stands against Trump's effort to auction off our air, water, and climate to the highest bidder. We resist efforts to prioritize profit over human life and stand with frontline communities, those in small towns and urban areas who face the brunt of pollution, to fight for climate solutions that put them first. We will fight alongside the underdogs, those most ignored, to ensure that their voices are heard because we all deserve clean air, clean water and a healthy environment to raise our kids.”
-Vien Truong, Director of Green For All

"The corporate cartel that works to wage wars, pollute the planet, concentrate the wealth, and restrict the rights of dissenters finds a way to all work together. Those of us seeking a better world -- a sustainable world at all -- must work together to resist the path the U.S. government is on and to project and push forward a better one. Our collective numbers give us power, and our interlocking issues give us a persuasive alternative. Shifting military spending to human and environmental needs makes a world beyond our dreams perfectly achievable.”
- David Swanson, Director of World Beyond War

"The Sierra Club's mission is to protect both the natural and the human environment. That is why we stand in solidarity with organizations fighting for a fair and safe America that protects everyone. We stand with workers and working families, for women's rights and LGBTQ rights, with people of all faiths and backgrounds, for public health and economic fairness, and on the side of racial justice and immigrant families. To change everything it takes everyone, and that's exactly why we're going to stand up together over the next four years and fight to protect the people and places that we love.
- Michael Brune, Sierra Club Executive Director

“Democracy is strengthened by welcoming people of all backgrounds and views in building a country that recognizes the self-worth of every individual and every voice,” said David Donnelly, President and CEO of Every Voice. "Unfortunately, Donald Trump has repeatedly shown that he has no interest in doing what’s necessary to expand and protect our democracy—and in fact, in policy and words, he has done the opposite. We are committed to fighting everyday, united with allied organizations and millions of Americans, for a political system that works for all of us and we fill fiercely defend the rights of our fellow citizens to be heard, respected, and counted.”

“Trump's presidency represents an existential threat to an open internet and an adversarial press,” said Free Press CEO and President Craig Aaron. “Based on its appointments and actions so far, the Trump administration appears committed to undermining everyone’s rights to connect and communicate. We’re dedicated to fighting Trump's agenda on media and technology while supporting the resistance efforts of groups doing important work elsewhere. Trump has named numerous people to his administration and transition team with long histories of support for dangerous and often racist policies and actions. Many others have openly campaigned to gut essential public safeguards in every area from worker safety to the environment to telecommunications. All must be resisted from day one."

“The Trump administration promises to roll back our environmental laws, gut civil rights protections, and enrich the pockets of Wall Street at the expense of everyone else,” says Wenonah Hauter, Executive Director of Food & Water Action Fund. “We can’t let this happen—and together, we can resist the worst effects of his presidency. We’ll keep the pressure on our elected officials to represent the majority of Americans that want safe food, clean water, a stable climate, and a democracy that works for all of us.”

"As the chief law enforcement officer, the attorney generally has far-reaching decision making power over issues that impact every person in the U.S." said Kalpana Krishnamurthy, Policy Director at Forward Together, a national advocacy organization. "If appointed, he will be the final decision maker on if the FBI can profile Muslim members of our community, whether or not to sanction stop and frisk policies, oversight of our prisons, the Department of Justice and drug enforcement. He has a track record of disregarding civil rights, denying racism, and promoting a radical agenda that would undo many of the laws that have given voice to communities of color historically shut out of our democracy. His values don't reflect an America where all people can thrive and we are united in opposition to his nomination."

“The blueprint for failure is division and ambivalence in the wake of a united conservative agenda that is intentionally undermining our democracy and threatening our communities,” said Judith Browne Dianis, Executive Director of Advancement Project’s national office. “Our power to resist and reclaim our democracy is rooted in our shared commitment to dismantling interwoven systems of oppression. We are putting the new administration on notice: every day of the next four years, be prepared to confront powerful organized communities who refuse to be silenced.”

“We have witnessed one of the most contentious and emotional political races in our country’s history. What we have learned is that, now, more than ever, we need to come together to uphold our shared values of freedom and equality for all. Arab and Muslim Americans have long dealt with xenophobia, Islamophobia, racism and bigotry. Throughout the presidential election, we were faced with many unprecedented obstacles, and yet we persevered and remained committed to improving and empowering our communities. We know we must maintain our spirit of advocacy and become stronger leaders for a more hopeful future.” – Nadia El-Zein Tonova, Director of the National Network for Arab American Communities (NNAAC)

“America is great when it becomes more inclusive, more democratic and more just. The Trump administration threatens these values, and democracy itself. Against this threat, We the People will protect our democracy and the values we most cherish by exercising our democratic rights. We will stand together to reject efforts to denigrate, injure or exclude Muslim Americans, immigrants or any other targeted community. We will reject Trumpism and assert the central importance of love and solidarity, kindness and decency to who we are a country and a people.” – Robert Weissman, President of Public Citizen

Dan Cantor, National Director, Working Families Party: "Donald Trump is a dangerous narcissist. We need to block his agenda of greed and division, and and we need to stand together to do it. That's the only hope for building a nation that works for all of us."

“Trump’s presidency threatens immigrants, African Americans, Muslims, workers, women, children, the elderly, the disabled, LGBTQ people, and many others. Indeed, it threatens all that holds us together as a society. We the people – society -- need to defend ourselves against this threat and bring it to an end. Resisters to repressive regimes elsewhere have called such resistance to tyranny “Social Self-Defense.” The struggle to protect our people and planet against the Trump agenda requires such a strategy. Therefore we are proud to join the United Resistance Campaign as a form of Social Self Defense.” -Michael Leon Guerrero, Labor Network for Sustainability

“If Trump thinks this wave of opposition and resistance will burn out quickly and die, he’s dead wrong,” said Kieran Suckling, Executive Director of the Center for Biological Diversity. “We’ll be there every day, every week and every year to oppose every policy that hurts wildlife; poisons our air or water; destroys the climate; promotes racism, misogyny or homophobia; and marginalizes entire segments of our society.”

“We live in a global world where our lives are intertwined. An act of hate against one is an act of hate against all. So we stand here united with all voices of peace, tolerance, racial equity, and justice. We gain our unity from the diversity of our religions, of our sexual preferences, women’s rights, and of our racial diversity. We allege to speak for all who are voiceless, marginalized, and criminalized. We are one force, united together for the betterment of humanity.” -Anuradha Mittal, Oakland Institute Executive Director

"It's time to get back to the basics: everyday people with a plan, through everyday acts of courage, will eventually make history." - Ai-jen Poo, Director, National Domestic Workers Alliance