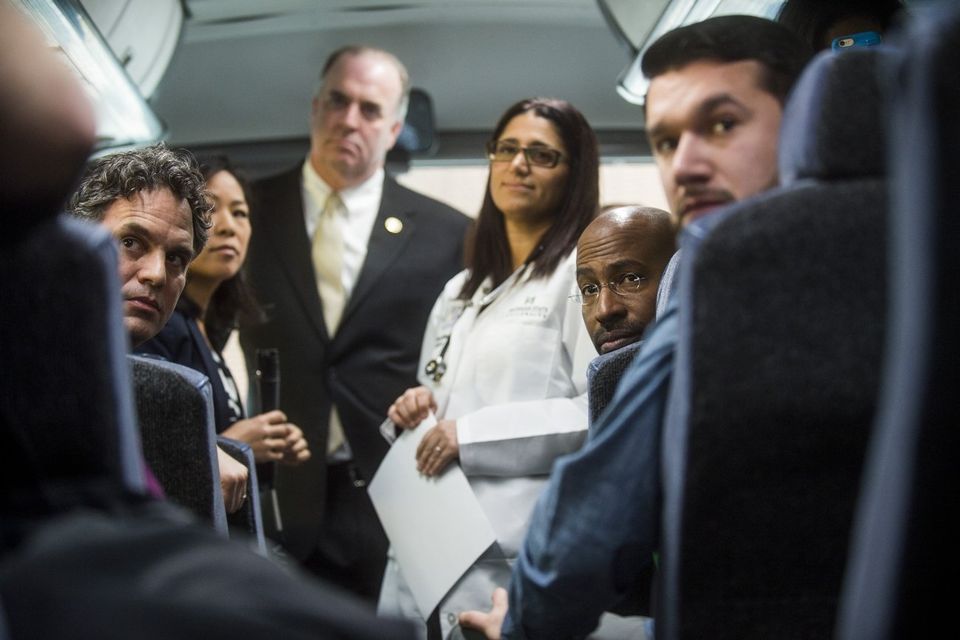 FLINT, MI - Actor Mark Ruffalo has been joined by political commentator Van Jones and Vien Truong in a petition calling for Gov. Rick Snyder to fix all the pipes in the city as a result of the Flint water crisis.

The campaign, being held in coordination with Flint Rising, a coalition of organizations in the city, recently launched a petition demanding three steps by the governor.

"What is happening in Flint is a national disaster created and perpetuated by Governor Rick Snyder," said Ruffalo, founder of Water Defense, a nonprofit dedicated to clean water, in a statement.

The demands include replacing all of the city's pipes with local labor, repaying residents for water purchased during the crisis, and providing systemic, free and accessible health and education networks.

Ruffalo, Jones, and Truong, director of Green For All, visited and toured the area March 7, including a stop at Hurley Medical Center to speak with with Dr. Mona Hanna-Attisha.

The group also met with Flint residents during their time in the city and held a press conference at St. Michael's Catholic Church where Ruffalo said President Obama should declare the city a federal disaster area and provide aid.

A March 25 letter from the Federal Emergency Management Agency approved the state's request to extend the president's emergency declaration for Flint that was signed off on in January.

The president's decision came after Flint, Genesee County, and state of Michigan declared states of emergency after tests revealed elevated levels of lead in children.

Snyder has announced a plan to compensate residents for approximately 65 percent of water bills, not including sewer costs, dating back to April 2014, when the source was shifted to the Flint River.

Flint Mayor Karen Weaver announced earlier this month utility bills would be suspended until the credits and adjustments are finalized.

Water bottles, filters, and test kits have been provided at fire stations for residents, along with multiple groups and organizations inside and outside the city providing water to residents.

"People can't live forever on bottled water, and the time has come for Governor Snyder to step up and fix every pipe in Flint," Ruffalo said. "Water is a fundamental human right, and we will fight until that right is restored in Flint."

Some lead service lines have been replaced in the city, as part of Flint Mayor Karen Weaver's Fast Start program in conjunction with the state of Michigan's plan to complete a water infrastructure reliability study and long-term comprehensive management plan.

Jones, a regular CNN commentator, expressed frustration for residents who've bought homes in the city and lost access to clean water, adding "It's inexcusable for these communities to be neglected a moment longer."

Truong called the situation in Flint "a national disaster that has robbed families of their health, their life savings, and even the lives of their expected children" and urged workers from the community be hired to perform the lead service line replacements.

"The time has come for Governor Snyder to fix the pipes, and do it with local labor," she said. "Our communities refuse to be bullied into silence."