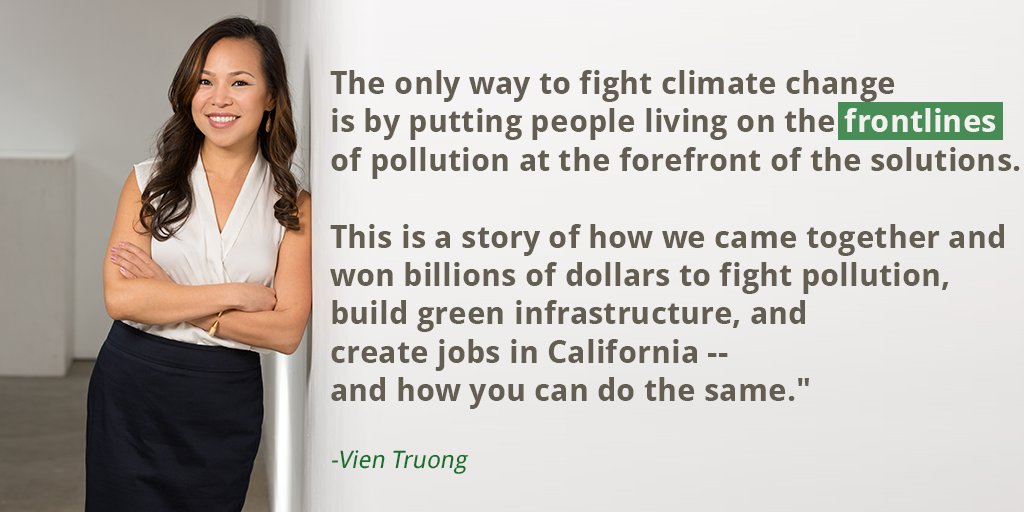 "Like many Americans, the people I met there were worried about what Trump’s presidency will mean for a world in ecological crisis, now that climate-change deniers and the powerful business interests that back them have their fingers on the controls." - Vien Truong

While President Trump stood in the White House Rose Garden last Thursday to announce America’s withdrawal from the Paris Climate Accord, I was in Brussels at a green jobs conference. It was a stark contrast. Even as Trump announced that the world’s second-largest polluter would no longer commit to curbing carbon emissions, a choice he wrongly framed as good for the U.S. economy, I talked with European leaders about the promise of advancing a green economy and ways to avoid disastrous environmental policies that could undermine it.

Like many Americans, the people I met there were worried about what Trump’s presidency will mean for a world in ecological crisis, now that climate-change deniers and the powerful business interests that back them have their fingers on the controls. But while it’s true that Trump’s pullout of the Paris Accord marks the end of official American leadership on climate change, I assured my European counterparts that what’s happening in Washington doesn’t reflect what’s happening in the country at large. And that’s because our business leaders—the Koch brothers and their ilknotwithstanding—already know that Trump’s plan to revive fossil fuels is fake news.

Green jobs are the future, even if that’s a future some would rather fight than embrace. Our business sector can lead the way on protecting the climate and still reap profits in the process. This really is one of those situations where doing good can also sustain our economy.

Of course I’d say this, though. As a mother raising twin toddler boys in Oakland, one of our nation’s most polluted cities and as someone who’s grown up on the front lines of pollution, the stakes for my family and me couldn’t be higher. And as director of Green For All, a nonprofit that works to build an inclusive green economy that’s strong enough to lift people out of poverty, I know we can’t afford to delay action. Prioritizing big oil profits over people and our planet is killing our ability to compete in the global economy.

If you don’t want to take my word for it, take Michael Bloomberg’s. The first thing the billionaire businessman did after Trump’s announcement was pledge to donate the funds that the U.S. had previously committed to the Paris Accord. “Cleaner sources of energy—including solar and wind—[are] cheaper than coal. It makes no sense to pay extra to poison our environment—or to kill jobs,” he said after meeting with French President Emmanuel Macron and Paris Mayor Anne Hidalgo on Friday.

“Americans don’t need Washington to meet our Paris commitment,” Bloomberg continued, “and Americans are not going to let Washington stand in the way of fulfilling it.” The day before, Tesla CEO Elon Musk and Disney CEO Robert Iger both left presidential council advisory positionsover Trump’s decision.

Other business leaders are already echoing Bloomberg, Musk, and Iger. Earlier this week, Apple CEO Tim Cook said that Trump had “decided wrong.” I urge others to follow their lead. Don’t believe Trump’s lie that we have to choose between creating jobs and curbing pollution and climate change.

The numbers tell the truth. And the truth is that clean energy jobs alreadyoutnumber all fossil-fuel jobs in the U.S.—and not just by a slim margin, but by a factor of five to one. Solar jobs outpaced coal, oil, and gas jobs by the end of 2016, putting them on the path to become the largest share of energy jobs in America. This shouldn’t be news to officials in the Trump Administration; all this data is publicly available in the Department of Energy’s own 2017 Energy and Employment report. In many states, too, solar is already cheaper than coal. With trend-lines like these, it’s pretty clear that investing in green jobs isn’t just the right thing to do—it’s smart for every company’s bottom line in both the near- and long-terms.