Clean power takes off with 'breakthrough' into low-income communities 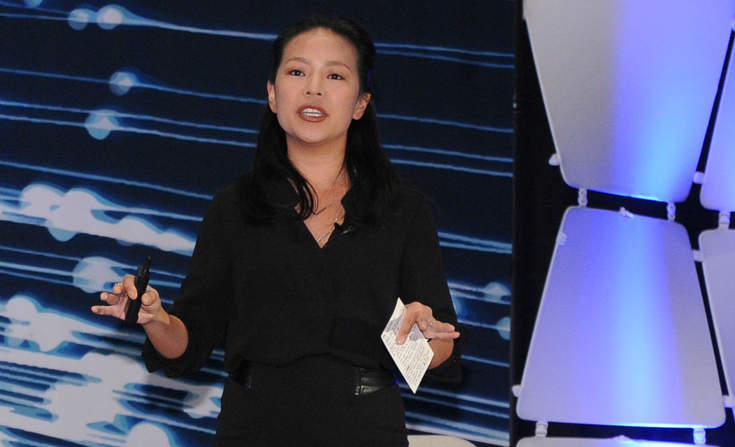 When California was building its carbon emissions cap and trade program, environmental justice activist Vien Truong and a few others came to the state with an idea.

The green economy had been leaving out the people most hurt by pollution — the low-income communities near highways and ports and power plants who breathe in exhaust and particulate matter.

Because the law requires that cap and trade proceeds be used to reduce greenhouse gas emissions, why not set aside a percentage to assure that disadvantaged communities most affected by pollution benefit?

Truong who was then with the Greenlining Institute, joined with activists from the Coalition for Clean Air who championed this idea, the Natural Resources Defense Council, the Asian Pacific Environmental Network and the Ella Baker Center for Human Rights to find a receptive listener in the legislature.

State Sen. Kevin de León (D-Los Angeles) who is now President pro Tempore proposed a bill to ensure that 25 percent of proceeds from cap and trade go to benefit low income communities most affected by pollution.

California's cap and trade system, which launched with its first auction in November 2012, arguably has worked by creating a market for trading carbon allowances, bringing $969 billion in proceeds to the state and lowering carbon emissions here — although the recession is believed to also have reduced emissions. Innovation in clean tech has picked up in California as factories and utilities look for cost-effective ways to comply.

But another clear benefit has been the set-aside investments that benefit low-income people in polluted areas. Those investments have begun to clean up the air in disadvantaged communities and create a few jobs.

"Nearly $1 billion went to creating affordable housing near public transit, went to free and low-cost energy efficiency programs and renewable energy, went to creating van pools for migrant farm workers in rural areas without fixed bus lines, went to creating electric car shares for families that couldn’t afford to own cars," said Truong, who is now national director of Green For All, speaking at VERGE 2015.

"It went into creating electric trucks and buses — a huge issue for environmental justice communities living near (the port of) Long Beach and the Port of Oakland — it went to planting trees in concrete jungles, urban forestry."

Now she and others hope that the success of California’s plan can spill out nationally. 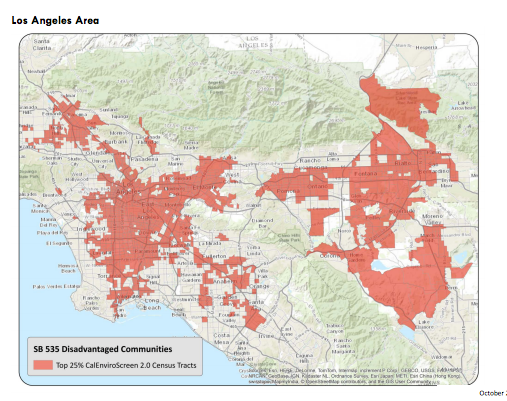 California EPA
The communities around Los Angeles that are designated to receive cap and trade proceeds.

Her work in getting California to spread the largess of cap and trade was honored last week by TransForm, with its 2015 LIVE Award for leadership, innovation, vision and equity. Truong was awarded with Mary Nichols, chair of the California Air Resources Board which is the architect of California's cap and trade system.

As California goes, so goes the nation

In the Obama administration’s Clean Power Plan, states are asked to devise their own plans on how to reduce carbon emissions from power plants. But one thing they are required to do is "engage disadvantaged communities" in making the plan.

Truong and green jobs pioneer Van Jones see these pieces of the Clean Power Plan as victory  — proof that California’s plan worked and that it could be a model.

"With this initial breakthrough into low-income communities, we are beginning to see market growth really take off" for renewable energy, car-sharing and the like in disadvantaged communities, Truong said in an interview with GreenBiz. "When you begin to put solar onto working family households, then you really get the market to take off," because neighbors will follow.

For businesses, this is about opening whole new markets to renewable energy, electric vehicles and zero-carbon transit.

Jones, former White House Council on Environmental Quality advisor, founder of the Dream Corps and numerous other social justice organizations, and an author and CNN commentator, said the very deliberate process in California has translated to a different kind of clean energy and clean tech economy. He said it would behoove other states to follow the path.

He said there’s opportunity waiting in states that do so. 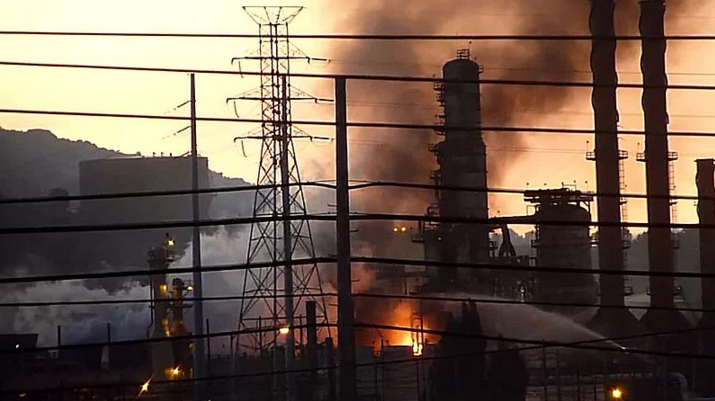 Wikimedia commons
Fire at the Chevron refinery in Richmond, CA, in 2012 sent smoke over residential neighborhoods.

"President Obama through the EPA put out these rules on the Clean Power Plan, telling the big power companies they have to pollute less. That is a huge opportunity," Jones told the VERGE audience.

"The African-American community spends about $1 trillion a year, so there is a huge market opportunity there," Jones said — not to mention the market that Latino-Americans, Americans and other traditionally ignored groups present to business, he said.

"Because all 50 states — well, California has already done it — all 49 states have to sit down and come up with a plan," he said.

"In California you had at the table from the beginning African-Americans, Latinos, labor business, health care saying how can we have climate rules that provide more work, more health for everyone?" The result was the program that he said works.

California has become an engine of clean tech innovation which is a growing part of the state's economy.  "When you push down on pollution, you push up on solutions."

So in devising a path nationally, or in invidual states figuring out how to comply with engaging disadvantaged, the opportunity shouldn't be overlooked.

But including previously shut out communities from planning on the Clean Power Plan is not enough, some say.

As the whole market segment of sustainability rises and with it the sharing economy and renewable energy economy, more intentional effort around including all is required said Antwi Akom, an entrepreneur, professor at San Francisco State University and founder of the Institute for Sustainable Economic, Educational, and Environmental Design (I-SEEED).