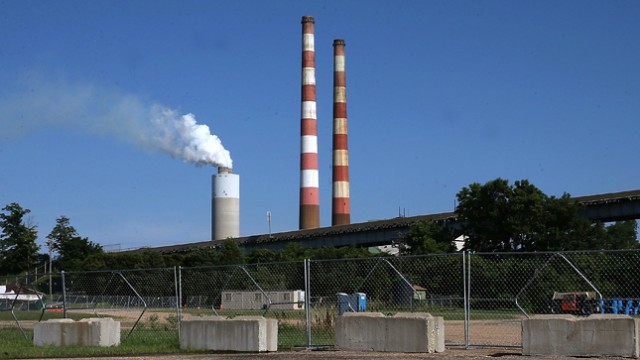 California is leading the way. On Sept. 8 Gov. Jerry Brown signed SB 32 into law, an extension of California’s historic and game changing climate law. It aims to reduce emissions by 40% by 2030.

But it does something else equally historic: it secures the single most game-changing transition program in our country, taking money from California’s cap and trade program and using it to rebuild communities worst hit by both fossil fuel pollution and poverty.

The reality is that for decades, low-income communities and communities of color have been plagued by pollution from the fossil fuel industry. When a coal-fired power plant moves in, “white flight” sees more affluent residents move out. Often, fossil fuel corporations just move into black and brown communities first, because richer and whiter communities have more political clout to stop them.

I grew up in one of these “environmental justice communities.” People in my neighborhood in Oakland, Calif., have a life expectancy that is 12 years shorter than a nearby, more affluent suburb. In similar communities across the country -- Chester, Pa.; Flint, Mich.; Chicago and many others -- our friends and family have higher rates of asthma and cancer. We spend more on our health as a result and overall have less wealth.

When Gov. Brown signed SB 32 into law last week, he jumpstarted the future of America’s most revolutionary transition process. That program has already invested nearly a billion dollars into rebuilding communities struggling with poverty and pollution. From solar panel jobs to ride shares and clean energy programs, this program is bringing everyone along for the new era of clean energy, not just the wealthy, powerful and white.

If the federal courts lift the current Supreme Court stay on President Obama’s Clean Power Plan, it has the power to create carbon pricing programs across the country like California’s. That would mean dozens of opportunities to replicate California’s achievements in other states, dozens of opportunities to ensure black and brown and poor communities join the clean energy era.

Polluters are already gearing up to try to oppose this climate progress state by state, no surprise there. The fight won’t end in North Dakota, just like it didn’t end with Keystone XL -- but we will win.

The question now is where we go next, and who do we take with us. California is answering that question with a fast transition to the clean energy economy in a way that rebuilds the very communities thrown under the bus by fossil fuels.

The era of fossil fuel dominance will come to a close. We already have more solar jobs than coal jobs, and solar is the fastest growing energy source in America. Now, we need to fight for a transition, like California’s, that doesn’t leave black, brown, and poor communities behind. We have a wildly successful model to guide us, and the time has come to expand it.

Vien Truong is director of Green For All.