A Coalition of Angry Moms Want Congress to Fix the EPA 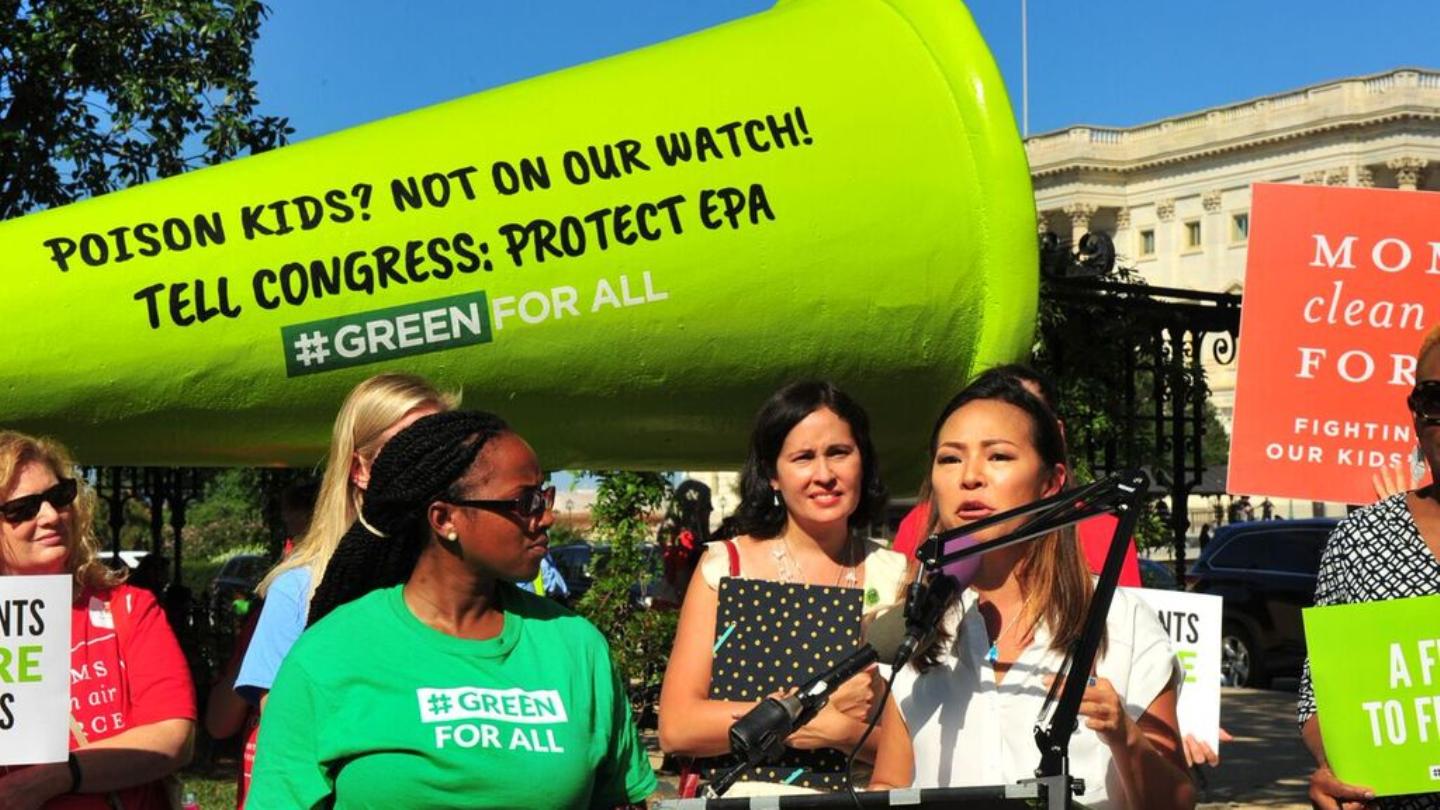 At the end of September 2017, women in Congress received a special delivery. An open letter signed by 100 women—including Alfre Woodard, Bozoma Saint John, and Ashley Judd—urged the legislative ladies to guard the Environmental Protection Agency (EPA), which is in danger of losing a third of its budget under the Trump administration.

The letter explained why women lawmakers were targeted:

"A study of 130 countries found that, when women are in positions of political power, they are more likely than men to sign climate-change treaties . That is why we are urging our 21 women senators and 84 representatives to take that trend to heart, and to push as hard as you can to ensure that our world remains safe for our children and descendants. Protecting the EPA budget is a critical part of this effort."

Green For All, the environmental activism arm of Van Jones' Dream Corps, spearheaded the effort as part of its Moms Mobilize campaign and also delivered a petition signed by 300,000 moms and women who want to protect the environment.

Congresswomen heard the message. Rep. Barbara Lee (CA-13th District) champions the cause of Moms Mobilize. "Families across the United States rely on EPA programs to prevent environmental degradation, protect public health, and mitigate the devastating effects of climate change," Lee said during a Moms Mobilize press conference, where Representatives Tulsi Gabbard (HI-2nd District), Pramila Jayapal (WA-7th District), and Nanette Diaz Barragán (CA-44th District) also spoke. "These safeguards are of particular importance to low-income communities and communities of color, who are more likely to live near pollution and more vulnerable to the effects of climate change."

VICE Impact chatted with Dream Corps CEO and Green For All director Vien Truong to talk more about Moms Mobilize and the amazing California environmental legislation she shepherded that could be a blueprint for states across the country.

VICE Impact: Why is this particular campaign focused on mothers?

Vien Truong: Before I led Green For All, I had been helping to create solutions for poverty and pollution for about 10 years. After the election, I realized all of the work I had done was in danger. My kids were really young -- like three years old -- and I thought about what their lives would look like when they got to my age in their 30s. It looked grim.

We want to contribute to protecting the world, water, and air. It's non-negotiable to have a place for mothers to safely bathe their children, or breathe clean air, or have healthy soil. There are areas, like where I live in the Oakland/Fruitvale area in California, where there is more lead in the ground than in Flint, Michigan. As I've traveled to place like New Orleans or Las Vegas, we've gotten first-hand accounts of the types of environmental disasters families are currently suffering through. Moms are on the front lines.

How do you make sure environmental justice stays at the forefront?

It's not so much that environmental justice is more important than other issues, it's the fact that we should have enough love and energy to make sure Flint is not forgotten, that families suffering from water contamination are properly cared for, that we are preventing unnecessary tragedies when we can and so on.

We have the director of Health and Human Services flying around in private jets, but we don't have money for Flint. That doesn't make sense. What kind of "first world" are we? This is a moral call, not a political call.

Were you surprised at the response for the Moms Mobilize campaign?

Collecting 300,000 signatures in one month is a impressive for any organization. This was not a call against any one person, it was a call to action.

People are tired of talking about politics. They're worried about making rent, making their grocery money stretch to the end of the week, and practical issues like that. Pontifications about politics are not high on the priority list.

What are the solutions?

In the short-term, we want to defeat the EPA budget cuts. In the long term, we have to help bring understanding about the issues.

I know it's not enough to just pass policies. We have to bring more people along with us. Not enough people understand climate change. There is a softer and more abstract work with hearts and minds. Passing policy is the more concrete part. The hearts and minds work is understanding why this matters.

What types of policy solutions are there for environmental justice?

One of the initiatives I'm most proud of is California Senate Bill 535, which takes dollars polluters pay the state of California and reinvests them into the poorest and most polluted communities. We took in $140 million, and by leveraging that with private capital, we have created a pot of $2 billion in just two years to give to the communities most impacted by the corporate polluters.

To figure out how the money should be spent, we went to town halls, churches, and other local gatherings in the communities with high dropout rates, infant mortality, and the like. They told us what they needed and we took their direction. So, the money from the fund has gone to things like affordable housing, free solar panels that have greatly reduced home energy costs, trees in urban areas, and free bus passes for senior citizens and students.

That's the plan. Right now, Oregon, Washington, and New York are trying to replicate the policy and we hope to see more states join. When we make polluters pay, should that money go to tax breaks or to the impacted communities? We already have too many well-heeled corporate lobbyists at work. The communities have paid with their lives and lungs. Let's make sure money is invested in communities, not the pockets of big oil or big corporations.

Sign on to the Green For All climate justice petition on the official site and learn more about California's ground-breaking climate benefits legislation.