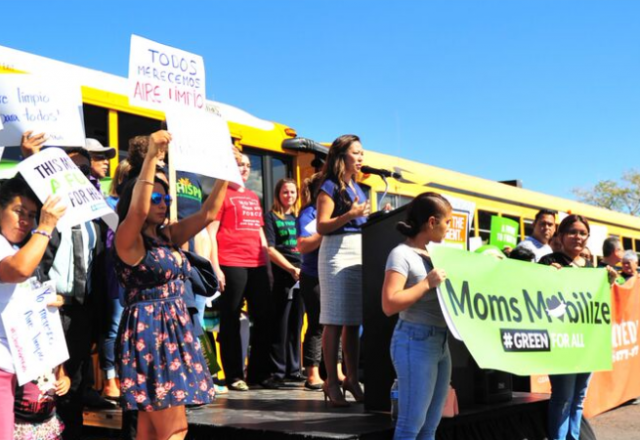 Vien Truong is no stranger to the climate justice movement. A long-time resident of Oakland, California, environmental equity is an abiding passion for the CEO of Dream Corps and leader of Green For All.

Nationally praised for her work developing energy and environmental policy, “this work has been personal for my whole life,” Truong told Politic365 in an exclusive interview.  “I grew up in a community that was considered one of the poorest and most polluted communities in the country – East Oakland, California. And because of the zip code in which I live, my kids and I are projected to live 12 years less than a more affluent family just seven miles away. We have higher lead poisoning in the community here than in Flint, Michigan. So for me, all of this is very real and very personal.”

The personal impact of how environmental issues affect communities across the country is what Truong and Green for All are hoping to tap in to with Moms Mobilize, a campaign to “bring together Moms from around the country to fight devastating cuts to our environmental protections being proposed by the Trump Administration.”

SPECIAL:HOW TO FIX YOUR FATIGUE (DO THIS EVERY DAY)

Dr. Gundry reveals the top 3 common foods that you would have never guessed were the cause of your fatigue.

From the water crisis in Flint, Michigan, to the crippling affects of Hurricanes Harvey, Irma, and now Maria, the impact of climate change and global warming are real, says Truong. “What’s happening all across the country is that people are starting to see that these attacks on the climate movement have a real, tangible impact,” Truong said. And “the one agency – the U.S. Environmental Protection Agency – that is supposed to protect our air and water, and protect us from these massive devastations,” she continued, “is the very agency that Donald Trump’s Head of the EPA is trying to dismantle [by] proposing a one-third budget cut this fall. That is just unacceptable.”

On Wednesday, September 27, #MomsMobilize is taking its message to Capitol Hill, hosting a day of action in Washington, D.C. to oppose any congressional roll-backs in funding for the EPA.  While the campaign is all about motivating everyday women to get more involved in the climate movement, several notable personalities have joined the cause as well, including Frances Fisher, Megan Boone, Amy Smart, Alfre Woodard, Ali Wong, Angie Martinez, Bozama “Boz” Saint John, Cheryl Contee, and Elianne Ramos.

“The blessing and curse of the moment is that for too long we have seen the Climate Movement be painted as an elitist, White thing, but we’re beginning to see the very visceral impact this will have to families in Flint, to families in Houston, to families in East Oakland and across the country,” said Truong. “People of color are really the ones who can’t afford to relocate and move out when these things happen.”

Women are key to the battle to protect the EPA and improve climate justice because, as Truong said, “women have an amazing power to influence not only the market, but also politics and policies. They have this often untapped power around how they spend their dollars, but also, non-college educated women in the United States have a huge ability to impact the direction of this country.”

“We give life,” she said, “and we can also use our power to protect life, and I think that’s what this campaign is all about for Green For All.”

#MomsMobilize is “bringing together moms from Flint, Las Vegas, Oakland, and other places around the country to say we’re done with the fighting. It’s not about being Anti-Trump, it’s about being for our kids and the future we want to live in.”

In encouraging women to join the Mom’s campaign, Truong’s message is clear – “When I talk to people in this country, oftentimes they say they’re tired of hearing politics. They’re tired of turning on CNN and hearing the political back and forth because it undermines the importance of issues and the reality of the things they’re facing. So our campaign with Moms is to say: it doesn’t matter who you voted for in the last election, let’s vote for solutions.”

To sign the #MomsMobilize petition, or support Green For All’s movement, visit the campaign website to learn more about ways you can get involved.