Q&A with Vien Truong: Once a refugee, now fighter of poverty and pollution 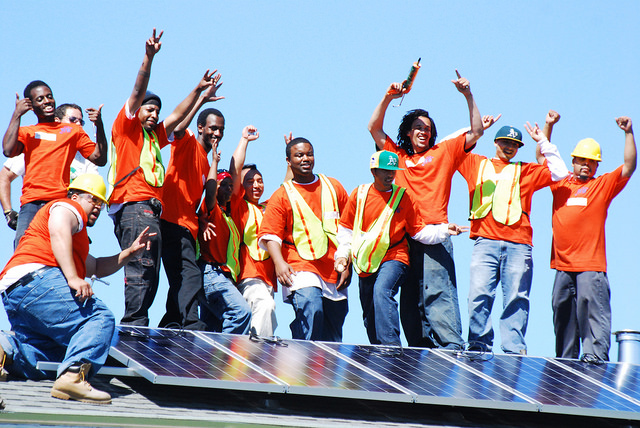 Earth Day, on April 22, is a moment for us to reflect on how we’re protecting the air we breathe, the water we drink, the species that share our habitats, and the spectacular landscapes we cherish. In honor of Earth Day 2016, the Hewlett Foundation is showcasing seven grantees who are working to help make the planet more sustainable. We’re rolling out a weeklong Q&A series with up-and-coming leaders who are passionate about the environment.

Kicking off the series, we spoke with Vien Truong, director of Green For All, a national initiative to build an inclusive green economy strong enough to lift people out of poverty.

How did you become involved with the environment cause?

When I was growing up, my family lived in some of the worst neighborhoods in Oakland, California. We were refugees from Vietnam and my parents didn’t speak any English.  We struggled to make ends meet. As a child, it was normal for me to see families dealing with severe economic, mental and social problems.

It wasn’t until I was able to travel and live in other parts of the United States that I understood it was not normal for families to live in cramped apartments festering with cockroaches; kids to attend schools that are surrounded with chain-linked fences that look like prisons; neighborhoods to have regular drive by shootings. When I began understanding that these conditions were abnormal, I decided to dedicate my life to alleviating poverty and building the beloved communities that Dr. Martin Luther King envisioned.

As I continued working on anti-poverty solutions, I became more sensitive to environmental concerns like droughts, polluted air, and lack of reliable clean drinking water. Fighting for poverty felt like an immediate need – there are families out there suffering and starving. It was hard, however, to silence the nagging thoughts that we were burning up our planet and that environmental issues also need our attention.

When I learned that one can work to solve environmental problems and economic justice – I was hooked. I joined Green For All in 2008 to lead their state policy work. It was a great time to join the green jobs movement and we were able to pass a number of policies in a few years.

Can you describe a recent effort that you are proud of working on?

Green For All decided to support the residents in Flint, Michigan, who have been struggling with a toxic water crisis. We reached out to local organizers to ask whether we can help them in getting their stories out to a national audience. At the time, major media outlets were beginning to move on to the next news cycle. News that did cover Flint did not give residents a more central role in their stories.

We wanted to lend our access to media, artists, influencers and policymakers to support Flint residents. By doing so, we were able to direct major media outlets to listen to their stories, struggles and needs. It was a proud moment for our team to stand in solidarity with the local Flint leaders and to make sure that resources were directed to them from around the country. We are now working to ensure no other city experience the tragedies that befell Flint.

What is one message you would most want to tell world leaders?

For too long, the traditional wisdom has been that the problems of poverty and pollution are so big they can’t be handled together.  We now know that these issues are so connected we can’t solve either of them unless we think about them together. Solutions like California’s SB 535 model, legislation passed in 2012 which caps the state’s greenhouse gas emissions, charges polluters for the damage they cause, and directs hundreds of millions of dollars to disadvantaged communities most impacted by climate change, is a great example of the possibility of tackling both issues simultaneously.

We can build on this model nationally through the Clean Power Plan or through state policies. By regulating polluters and investing in low-income communities, we can begin to clean up our air and improve the quality of life for all citizens while reducing the costs of living.

I’m increasingly aware of the number of nonprofit leaders who are burned out and leave the field. Given that reality, I’ve made a conscious decision to find time to rejuvenate myself by spending time with my loved ones — family and friends. Most recently, I’ve also started exploring classes on the weekends – these classes range from learning how to do handstands to Muay Thai. It’s been a lot of fun.

Photo credit: Mosaic Solar and Green for All