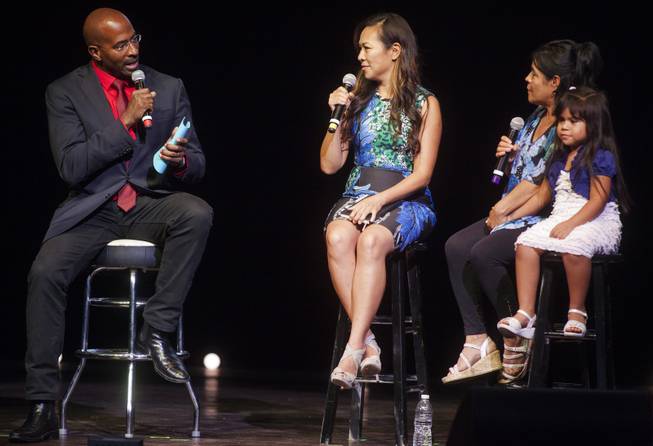 Long before CNN political contributor Van Jones brought the We Rise Tour across the United States, he was a self-described “comic book nerd” — this was before being a “comic book nerd” meant going to four Marvel movies.

“I was a little, skinny, nerdy kid who got bullied a lot, and I read a bunch of comic books about nerdy people like Peter Parker and Clark Kent doing heroic things to help people,” Jones said. “I’ve known from the beginning that I wanted to be in public service, and carry on the legacy of Dr. Martin Luther King Jr. and the Kennedy brothers.”

On Aug. 19, Jones brought the We Rise Tour to the House of Blues at Mandalay Bay — the last stop on a 14-city tour that invited artists, athletes and thought leaders to engage in social change.

Jones’ message brings people together across partisan lines to solve the nation’s toughest problems by focusing on commonalities. In addition to teaching people how to fight with love, he outlines multiple ways to get involved.

Who is Van Jones?

Many people know Jones from his passionate hosting of CNN’s “The Messy Truth.” This Yale-educated attorney has been a leader in environmental and social activism for years.

“I’m not a ‘TV’ guy,” he said. “I’ll be 50 next year, and I’ve spent the vast majority of my life not on TV, working on these issues, writing books, building organizations, working on campaigns.”

By working to close prisons, promoting criminal justice reform and advocating for climate issues, Jones has become a real-life superhero to marginalized communities. But while pioneering multiple initiatives as the founder of the Dream Corps, his greatest feat is keeping people engaged in social issues, on the local level, and teaching people how to fight a productive, strategic, loving battle (see #LoveArmy below).

His best-selling books “Rebuild the Dream” and “The Green Collar Economy” reflect on his time in the White House and his journey to “redefine green.” His upcoming book, “Beyond the Messy Truth,” will shine a light on the tribalism that is tearing apart discourse in the U.S.

“Real life is a lot more messy than it looks on Twitter,” he said. “That’s why I call my show ‘The Messy Truth.’ Most people think all I do is sit on TV and argue with Republicans, but that’s always the smallest part of my day. Then I go in the green room and try to recruit them to my causes.”

What is the most pressing issue on your mind today?

The fight for democracy. When democracy starts to break down, it can spin quickly into racialized, tribalized violence. And you can’t solve any problems — economic, ecological or otherwise — if you’re having societal breakdown.

You’re trying to run a multiracial, multiethnic, multifaith democratic republic with equality for women and LGBT folks in the middle of massive economic and ecological change — that is a tall order. You can’t just sit back and assume it’s going to all work out if you just retweet all the stuff you agree with.

What can we do to communicate more effectively across partisan lines?

We’re supposed to disagree. That’s the whole point of democracy. The key is to not disrespect. We don’t have to agree with each other, but we do have to try to understand each other.

The problem is that we’ve come to believe that people who hold the opposite political views are enemies, and not our allies, in making democracy work. You need conservatives. They ask important questions, like “Who is going to pay for it? How much does it cost?”

Progressives like myself ask different questions, like “Can we have a great society if we only do those things that corporations can make a ton of money off of?” And if not ... we are going to need government.

We need each other. A bird can’t fly with only a left wing or a right wing, and in the back of my mind, I’m thinking, man, I sure am glad that somebody is asking these questions. If you think the world would be a better place without all of these people, then you’re in dangerous territory.

So we need an attitude change?

Life is short. I’m not going to let some weird orange dude tweeting steal my joy. We have some serious issues to resolve. But all the smarts are not in one skin color or one political party, so I’m open to being enlightened by anyone I come across. I mean, that’s how everyone was raised, anyway. It’s just that right now, the grown people are flunking kindergarten.

How do we develop more empathy and have a productive discourse?

The people who are going to win are those who are “smart with heart.” Really understanding where your opponent is coming from is going to make you more effective. Nobody cares how much you know until they know how much you care.

A lot of liberals treat folks from the red states like uneducated, unwashed masses that need to be converted to the NPR religion and force-fed some kale ... but that’s how colonizers look at Third World countries. You wind up creating opposition where you don’t have to have it.

To know when you’re being offensive, or when you’re just plain wrong, you have to have your heart open and understand where people are coming from. Sometimes, being smart is the dumbest thing you can do.