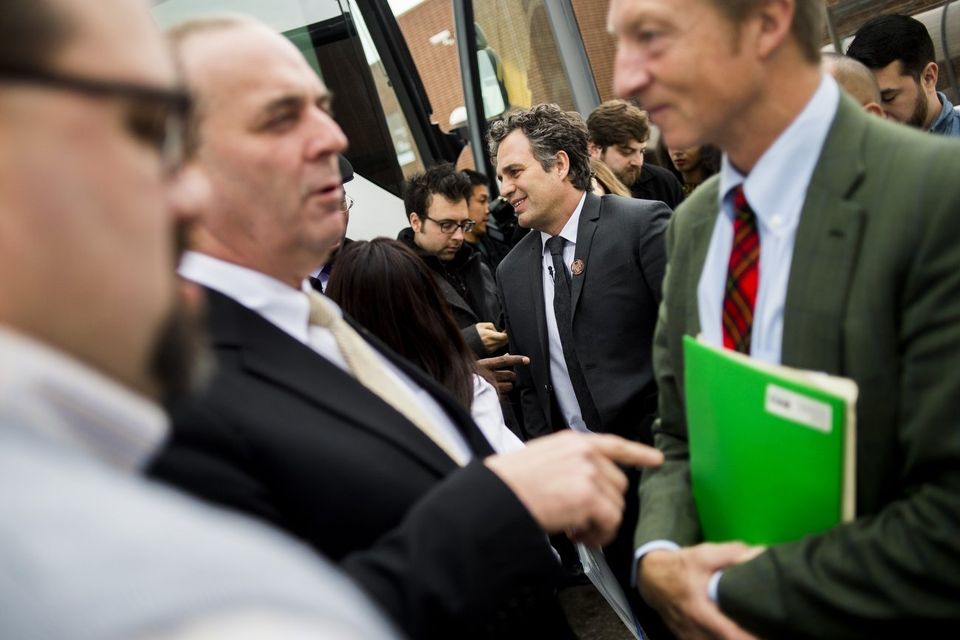 FLINT, MI - After hearing stories from those in the community of losing children, rashes, and other complications Flint residents have tied to the city's water crisis, actor Mark Ruffalo took the podium at St. Michael's Catholic Church.

"Mothers shouldn't be up here telling you that they're losing their hair and that blood is coming out of their ears," he told the assembled media during a press conference during a tour of the city to learn about the situation on the ground. "Mothers should be taking care of the children of the community.

The actor and founder of Water Defense, a nonprofit organization dedicated to providing clean water that will be conducting water testing in Flint, spoke bluntly about the issues, calling on Gov. Snyder to lose his job and President Obama to declare Flint a federal disaster area and provide aid for the city.

"The fact that we have to go back to a Congress that everyone knows won't do a damn thing and beg them for money so our mothers can take care of their children is an outrage in the richest country in the (world)," Ruffalo said. "It's an absolute outrage, it's a moral indecency."

President Obama signed an emergency declaration for Flint in January, providing additional resources and oversight, but the government has stopped short of proclaiming a federal disaster declaration.

He was joined by Van Jones, a CNN political contributor, who urged the media to keep the story in the spotlight as did U.S. Rep Dan Kildee, D-Flint Township, and State Senate Minority Leader Jim Ananich, D-Flint who joined along on part of the tour.

"The fact that it's allowed to be portrayed as anything other than a human rights disaster for American children is a tragedy," said Jones, after visiting Dr. Mona Hanna-Attisha at Hurley Medical Center with Ruffalo, Vien Truong, director of Green for All, and Tom Steyer, president of NextGen Climate.

One of those mothers who shared their story is 27-year-old Denettra Webster, whose 3-year-old son began having seizures and skin cracking 18 months ago, before people were aware of the water situation.

"He's had to have his tonsils removed because of the bacteria that was building up," she said. "It was causing them to swell. He stopped breathing 83 times in one hour."

The lead issue is one whose full impact may never be known among children after potential exposure to lead in the water system for more than one year, Hanna-Attisha said, with those at highest risk under six years old.

For Steyer, the trip to Flint was about amplifying the voices of the residents and their needs "to be heard throughout the United States," while Truong demanded action on all of the city's woes.

"Flint deserves clean drinking water. Flint also deserves infrastructure investments, putting back to work the people of Flint, the businesses of Flint, making sure that Flint knows that they are not alone," she said.

Through the water crisis, Art Reyes, director of leadership development and training initiatives at the Center for Popular Democracy, said the people at St. Michael's Church have been canvassing neighborhoods and trying to serve the population and it's that people power that will pull the city through at day's end.

"This community is full of fighters. "It's not a community that's going to roll over and die," Reyes said.